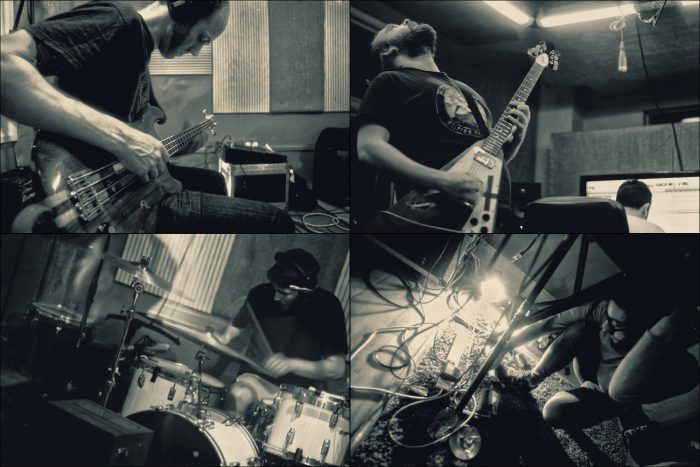 With their third long-player now in the rear-view mirror, Dublin space-cadets Wild Rocket are heading to Cork this weekend as part of a rare terrestrial excursion. Mike McGrath-Bryan talks with bassist Moose and synthman Niallo ahead of the journey.

Over the past few years, the outer reaches of Ireland’s music scene has registered periodic blips of strange activity on its periphery, indicative of trails of space radiation left by astral travel. The trajectory pictured is awfully similar to the journey of Dublin space-punks Wild Rocket, a hefty proposition that have sat at the intersection of accessibility, heft and psychedelia, slowly building cosmic momentum over the course of intermittent touring and a string of long-players. Third album ‘Dissociation Mechanics’ was released last summer via Sligo label Art for Blind, and Moose, the outfit’s manipulator of low-end distortion, has much to discuss regarding its creation.

“Well, we were living with the record in some shape or form since the beginning of the band. Some of the songs are older than those found on our first album, it was just a matter of it being the right time to document them in their final state. Obvious example would be ‘Caught In Triangle’, which contains some the first riffs we wrote together. I think the last two albums are indicative of our range but ‘Dissociation Mechanics’ feels a bit more varied, from fast to slow, loud to louder, etc. We’re excited to see where we end up with the next songs, but in the meantime we’re still very much enjoying playing these songs live. At the same time, we’re not afraid to take a few chances with structures or ideas with the songs, to keep things developing and moving forward. I’m sure if we went back and recorded it all again, it’d be a little different but really for us the album is a snap shot of that particular time and place we were in so there’s nothing to change or be unhappy with.”

The process of assembling a Wild Rocket record, while deriving from a bank of existing riffs this time around, is based on improvisation and experimentation, not only with instrumentation, but with arrangements and production. “Phase-changer” Niallo talks about the band’s composition process and how it informed the production and post-production of their latest long-player. “Typically how we write songs is we get together once a week or so, and jam and keep jamming riff ideas, until something develops that we all feel an affinity with, or just feels right. Things have gotten more difficult from album one to album two, as Breslin, our drummer, is living in London now. As a result, we don’t get to jam all together as often, but thankfully it hasn’t slowed us down. If anything, it just means the jams build up and up, until they need to be released in a torrent when we do get together. It also led to us doing more with repetition and opening up songs, or more so sections of songs, to be improvised live which has been great fun and strangely satisfying. With respect to recording we recorded with The Deaf Brothers in their studio on Abbey Street in Dublin. As with the first album we went in and recorded the basic parts together but then we had a lot more fun getting into layers of guitars, synths and effects. We kept going until it became an envelope of dense fuzz, swirling textures and whatever else came into our warped imaginations, all of course delivered with a snarl.”

‘Dissociation Mechanics’ is drawn together by an overriding set of themes/concepts, feeding from the current state of flux humanity finds itself in on several levels. Moose goes into further detail on the narrative behind the record. “The general concept of the album is about the human race’s amazing ability to continue cycles of destruction through an inability to learn from our mistakes, but also the possibility that we can learn from those mistakes via a sort of transformation, and finally put an end to the destructive cycles. It’s informed by a fascination with the collective cognitive dissonance we as a species are capable of, while also being influenced by the natural and societal landscape that surrounds us here. We’re fascinated with science, and the realm of science fiction, which ties into the sounds we make so when it comes to the actual lyrics, we’re always informed by those realms too on this album, especially black holes, whirlpools and portals to other dimensions. Finally, I love how a lot of the best sci-fi is left open to interpretation, so there’s always some of that.”

As mentioned at the outset, the record was released on vinyl via Art for Blind, a formerly Cork-based label that ran a stall out of the now-defunct Cork Community Print Shop, and now operates out of Sligo’s Model arts centre. Niallo is keen on acknowledging their role in the band’s rise, and their working relationship. “Two of us had worked with Art For Blind on previous releases with (previous bands) Hands Up Who Wants To Die and Wolfbait, and knew the lads pretty well, so when they offered to help with the release of this album, we were more than happy to work with them. It’s been great working with them, and no doubt we’ll work with them on further releases.”

The band are playing the Poor Relation this Saturday, alongside crossover thrash/hardcore Corkonians Bisect and post-rockers Aerialist in a killer lineup. Niallo collects his thoughts on heading to Cork as part of a weekend of gigging. “It’s great to play Cork. The scene in Cork at the moment seems to have hit a nice rolling boil once again. I see Cosmonaut Music getting a lot of positive press these days, something we can support, Cormac and the lads are doing a cracking job. Tombstone and Box Gigs have been doing amazing stuff for years too, and it’s great to see them and many other promoters working with a real community spirit. Definitely translates to great gigs. We played at the GGI Fest with Bisect last summer, and it was my first time seeing them, having heard so much. Any chance to look at (vocalist) Phil explode on a stage is always welcome. The new album they are putting out is meaty and aggressive, with messages that I think we can all get behind. Aerialist have shown that their knowledge of texture and dynamic is bang on. I’m looking forward to hearing it live!”