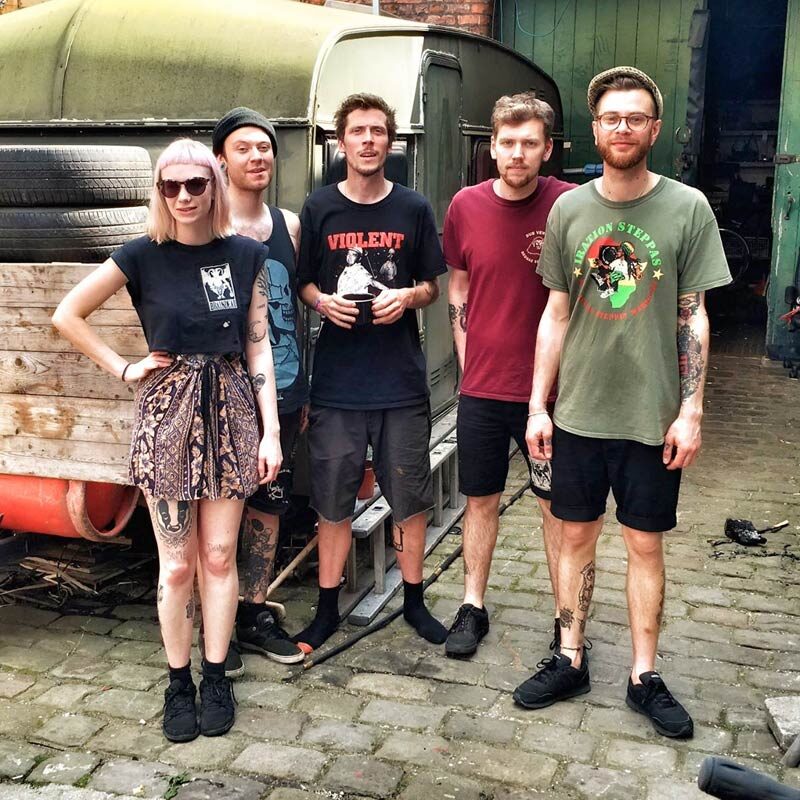 Ahead of a headline show in Fred Zeppelin’s next week, Mike McGrath-Bryan speaks with Porl, drummer from Manchester anarcho-punks Autonomads.

Living by a strict code of do-it-yourself ethics is constantly getting harder for musicians. The net is tightening on independent labels and artists in light of the ongoing changeover in habits to paid streaming, and questions of how the money trickles down persist. Meanwhile, city centres are changing all over Europe, and gentrification has seen to multiple city centres’ DIY spaces. Against all of this in the back, Mancunian dub/ska punks Autonomads continue to plough their own furrow, with fourth record ‘All Quiet on the Western Front’ releasing in February of this year via the Ruin Nation label. Drummer Porl talks about how it came together. “We wrote the songs for this record over the year or so before recording, with a couple of the tunes only really coming together just before we went in to the studio. We recorded most of it over two days in the Lake District, about a year before it was released. We used the same engineer as our last album, ‘One Day This Will All Be Gone’. The house belongs to our mate, she let us have free run of the place, so had cables trailing around the house, micing up guitar cabs in cupboards. We built a ‘vocal booth’ out of some mattresses that were lying about. If you listen closely you can hear the sound of the fire crackling on ‘Babylon Rock’. It was all pretty relaxed, and easier doing it away from a professional studio where time is money and it can feel a bit clinical.”

The band is currently dealing with being split between three cities, and working away on other musical projects at the same time. Touring and releases stay co-ordinated and organised, but with the effort of the whole band, staying connected while occupying different roles. “Once upon a time, most of us lived together, so booking a gig was as easy as walking around the house and knocking on a few doors. These days it’s WhatsApp and emails! On the surface it might appear organised, but most of the time it’s like a pan of spaghetti on the back burner (laughs). I do most of the booking and gig listings, Eliot handles the orders. We all feed ideas in and meet up when we can. Usually about an hour before we play a gig! The plan is to meet up for a few days at a time at a mate’s pub, and practice on blocks like that. Being in Bristol, Manchester, Windermere, Stratford and having other projects takes some juggling, but it happens because we all want it, I guess. If we weren’t all best mates it would be hard!”

Aside from a 7″ release of the EP, ‘All Quiet…’ is also finding its way out on tape this summer – what’s the continued appeal of a tape pressing now that the novelty factor of the tape revival is all but done away with? “A label from Manchester called Prejudice Me are taking it on, along with an American label, No Time Records, and Hamburg’s Uga Uga tapes. All people we’ve met over the years. I guess it’s another format that people still like, still collect, et cetera.”

Leadoff digital single ‘All Roads Lead to Hulme’ sets the tone for the record, an impassioned response to gentrification in their hometown and the cultural changes wrought by ongoing property speculation and poorly considered urban regeneration programmes. “The photo on (the front cover of the 7”) was taken by (band member) Iain. Hulme, Manchester. Hulme is significant for the travellers, squatters and wrong’uns. The development of this area was the focus of most the record, and the high rent prices & new builds are forcing people to move on.” It’s easy to draw comparisons to what’s happening here in Cork, with arts centres being cleared out of the city centre for offices and a Celtic Tiger-style property bubble pricing longtime city-dwellers out of their homes and communities. Porl has advice for artists, activists and workers dealing with displacement in the wake of gentrification. “Write about it, document it, it’s a people’s history that needs telling. Future generations can end up standing in the shadow of these buildings and developments, alienated from their environment and not knowing the history of an area. Hulme has always been home to the punks, hippies, crusties and anarcho types, and with that comes a creative and diverse force. The tide of gentrification that attempts to wash this away can leave people feeling alienated, and it’s important to tell these stories, resist high rents, squat and occupy space.”

Political music is everywhere, and more accessible than ever thanks to streaming. And yet, whether through a growing concentration of media ownership and interests, or a lack of curatorship on the part of streaming services, there’s a dearth of social/political music in the ‘mainstream’ or even relatively broad musical conversation. It’s a tough one to discuss without the threat of co-option, as Porl posits. “Do we want our music and that of our community co-opted by the same machine we’re singing against? So many bands with integrity and a voice enter the mainstream and get their art watered down into a pallid and consumable gruel, with nothing but the image of ‘social conscience’ left. An image that is sold back to us at too high a price, even though it was one that we all helped to create with love, hope and hard work. It’s very hard to penetrate the media sheen and come out smelling of roses. The mainstream music industry is a charade. You get into the magazines and the radio shows and TV by paying an agent to pay the agents of such institutions. All the romance and beauty of this industry that we believe as kids getting in to it is false. The reason so very few bands with integrity and a message reach the dizzy heights of the NME and Radio 1 is because they aren’t prepared to pay.”

Autonomads heading for Ireland in the next few weeks with tour support from solo side-project Captain Hotknives, and local support from alt-rock-informed punk rockers Audible Joes. It’s new territory for the band, but they’re ready to take on the red room upstairs on Parliament Street on the 10th. “We’re all really looking forward to coming to Ireland, as none of us have been before, and we have heard lots of great things!” It’s the relative calm before a storm of festival dates and touring for the record, suitably chaotic amid the rest of their lives. “We’ve got a few gigs dotted about in the UK. Manchester, Kelburn Garden Party, Swinefest and some others, then we’re off to Germany for a few festivals in July. Fire and Flames – a good anti-fascist crew putting this together. Then in September, we’re going to the Netherlands, Belgium and about again… between all of this, we are fitting in other tours and working precarious jobs to fund it all (laughs). We’ve all maintained pretty flexible jobs in order to carry on doing music. It can be tricky, but it means our creative stuff can keep its integrity and not be about the dosh!”

‘All Quiet on the Western Front’ is streaming and available for download at autonomads.bandcamp.com