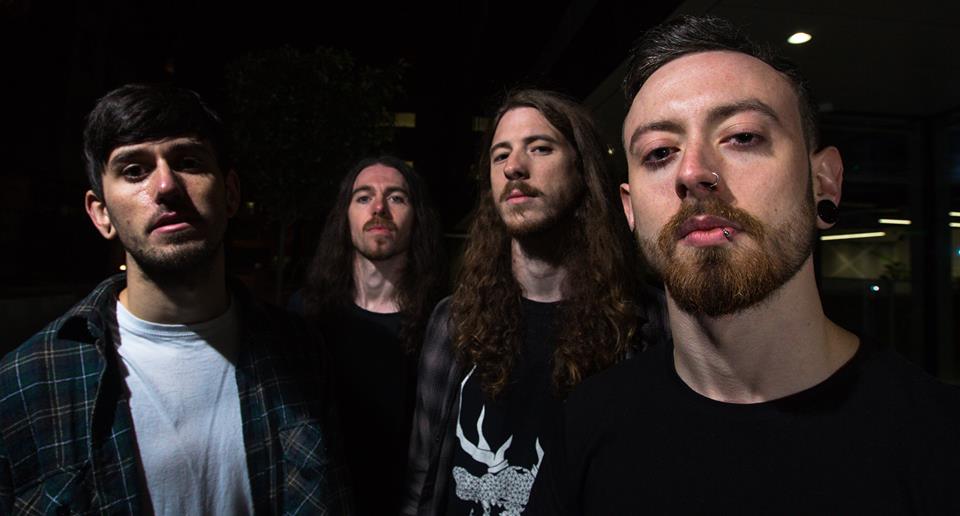 Typical of the bold nature of Cork’s metal and hardcore community, four-piece Worn Out have started as they mean to go on. After the release of second single ‘Circle the Drain’, Mike McGrath-Bryan speaks with the band about making noise, and their master plan.

An indicator of the cultural wellbeing of any city’s cultural community is the relative health of its musical and aesthetic subcultures. Although the teenage tribalism of music culture of yore has given way to wider palates enabled by near-limitless access to music of all stripes of various platforms, it is inarguable that support for ‘difficult’ music across the board has rallied in the past twelve months after an extended quiet period, boosted by adapting to new venues and being shaped by enthusiastic promoters. Metal and hardcore are among the musical microcosms in the city to have pulled out of hard times with bombast and exuberance – bands like hardcore outfit BAILER have begun taking to the continent, while promoters like Cosmonaut and Subtle Beast provide a sturdy, community-rooted infrastructure at home. And with the pall of inactivity lifting from the scene in Cork, so too are people getting into the jam rooms and garages available to them and throwing down.

It is in this climate that hardcore four-piece Worn Out has come together, formed from the wreckage of other bands from Cork’s wider alternative scene. Drummer Evan Prendergast says that necessity, and frustration, were the mothers of invention. “The idea for the band came from my frustration with another project at the time. I wasn’t getting what I needed from it, and began to grow increasingly agitated. I wanted to play something completely different to what I had been playing at the time. Initially, myself and Isaac (Riordan, guitars) talked about starting something that would hold influence from Alice in Chains. We jammed with no real intentions or ideas at first, and it was the most fun I’d had writing and playing in some time up to that point. It was obvious from the very start that what we originally had thought we would sound like was going to be much heavier. It progressively grew from there, with Xander (Coughlan) jumping in on vocals and Brian (Bowell, bass) joining the band later. It was a pretty organic process, fortunately.”

The early honeymoon period for groups of musicians can often give way to frustration, as getting a grasp on one another’s strengths and weaknesses gives way to dealing with differences in playing and creative differences. According to Riordan, that process was meticulous, and setting specific matters, such as guitar tones, in stone was a collective effort. “Assembling the set took all the way up to the couple of days previous to our first gig. Absolute squeaky-bum time (laughs). We had a lot of loose ends to tighten up, but luckily it all came together in perfect time. I’m a bit of a technophobe when it comes to musical equipment. I honestly haven’t got a clue. I generally just plug in my guitar, and bash out some riffs… I knew what pedals I needed, and then there was a lot of messing around between different tones from different amps. Brian has a good head on him for the technical side of things, so I always put my trust in him. We’re still tweaking with our sound almost every practice.”

The band’s first single ‘With False Hope’ dropped almost by surprise toward the end of last year, alongside public word of the band’s existence. Accompanied by the single’s slickly-produced promo video, it was picked up by local blogs and specialist press further afield. Coughlan discusses the nerves he and the band underwent right before it released. “Before we first released it, I wasn’t sure of how people would react to it. From writing the tune with the lads, and recording it, and playing it over and over, I felt like I was sick of the tune. But the reaction was great, loads of different blogs putting it on their sites as well bands sharing our video on their social media. People are sound.”

Among the highlights of the band’s live run so far is opening for Swedish mathcore lunatics (and disciples of now-departed genre trailblazers The Dillinger Escape Plan) God Mother at UCC’s New Bar, being among the first bands to break new ground at a campus space rapidly becoming a centre of music for the city’s academic community. If that seems slightly unusual to the casual reader, one might only imagine what went through Prendergast’s head while climbing behind the kit. “It was great. The guys in Pyre Promotions know what they’re doing, with bands and venues. We’re playing in a skatepark (right before this goes to the streets) because of them. I’ve wanted to do that since I was about ten years old. Having a band like God Mother play in UCC is always going to make me laugh. During the soundcheck, there was an exam in the hall next to where we were playing, and we were pressured to keep it down. That is the most rewarding and funny thing to me ever. Someone had to sit and do an exam while we all soundchecked one of the hardest hitting bands around. Madness. I hope they all passed.”

Follow-up single ‘Circle the Drain’ released this past month, and maintains the band’s sonic momentum after an enthusiastically-received start. Bowell talks about the relief inherent to getting a piece of work over the line and to people’s ears. “I often say that I just try to write songs that I’m into, or enjoy playing. If I knew how to write a guaranteed hit I’d be rich by now (laughs). It’s impossible to know if people will like what we’re doing, so it’s still a mild relief when it’s finally out in the public domain and I’m not having to hang my head in shame. Everything after that is a bonus.” After the rocket-boost that the band have received for their confidence starting out, the band have a big 2018 in the pipeline. It’s encouraging, but when pressed for further info, Prendergast keeps his cards held firmly at his chest. “We had a plan from the start. We have so much coming for this year. We have some gigs we have to announce, as well as some new music that we’re biting our tongues over. Trust me. This is only… the middle of the start (laughs).”

As touched on at the start of the article, this buoyant mood of the band’s is reflective of the current celebratory mood of hefty music in the city. Cork’s metal and hardcore scene is stronger than ever, and Prendergast’s parting words sum up the state of the scene succinctly. “All I’m going to say is, if you have an idea about starting a band, if you have the tiniest little feeling about doing it, then do it. Get up and message people. Inquire and ask questions. Find like-minded people, and gig. Go to shows. Write songs and be supportive to others. That is how it’s going to continue and not just be surge and die out. Start a band. Now.”

Worn Out’s new single ‘Circle the Drain’ is available now across all good online streaming and download services. Check them out on social media for more info on upcoming gigs.