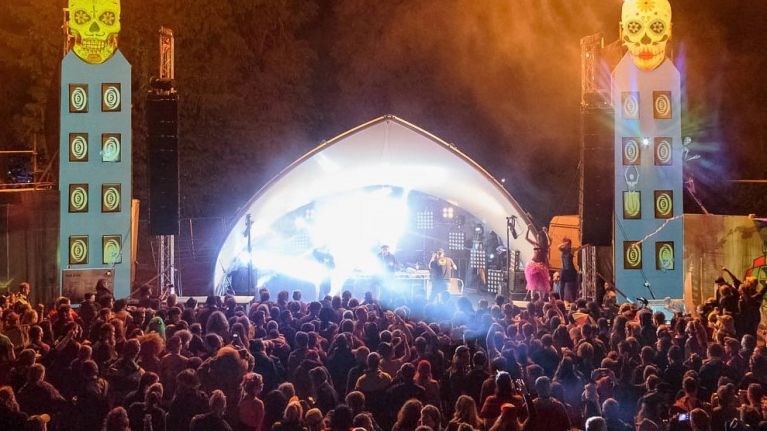 Ahead of the return of Townlands Carnival to the ancestral home of the Irish festival circuit, Macroom, Co. Cork, Mike McGrath-Bryan speaks with team members Sami Beshoff and Greg Woods about its growth and the future.

In the annals of Irish music history, and more to the point, that of our annual parade of summer festivals, there is only one town in this country that can rightfully claim to be the spiritual home of the phenomenon: Macroom, nestled away in the outer reaches of County Cork. In many ways, the first Mountain Dew festival in 1977 was a reaction to difficult circumstances for a town left behind by economic development, a destination event to counter the town’s rep as a stop on the way out west. Publicity stunts, like inviting Ugandan dictator Idi Amin, helped whip up mainstream curiosity about the festival format, but the arrival of Rory Gallagher onstage, sprinting from an Aston Martin in a straw cowboy hat and out to a baying, sold-out crowd, cemented the festival’s popularity for the following years, and laid the foundations for festival weekenders as a summer institution for generations of music fans.

The emergence of a spiritual successor to Mountain Dew’s legacy could also be seen as a reaction to the festival circuit in recent years, with a gap in the market opening up for a community-based alternative to a mainstream festival scene largely caught between detached festival “experiences”, nostalgia-show pandering, and late-teens rites-of-passage. Four years ago, a team of festival professionals took it upon themselves to go rogue, creating Townlands Carnival. Organiser Greg Woods talks about the festival’s creation. “The ethos of Townlands is in the name. We consciously chose to call it a Carnival and not a festival. A festival is something you turn up to, a carnival is an event you take part in. More and more festivals are becoming just billboards for advertising. We feel that if you take part in something, you get much more out of it. To this end, we have lots of workshops and participatory events, to give revellers an experience they won’t forget, because they were part of its making. The scene four years ago was also very biased towards the east of the country. Every summer, there is a mass exodus of talent from Munster. We felt it was time to harness all that creative energy, and showcase it on its home turf. The natural beauty of Rusheen Farm is perfect for us, it gives the decor/creative team a diverse environment to play with.”

Year one of the festival was always going to be part of the process of trial and error. Organising a festival, corralling together talent & people, and dealing with marketing all present unique challenges the first time out, and for Woods, this was compounded by geographical issues.

“Over the years many small festivals have tried what we are trying to achieve. There’s a reason why many festivals end up in the same catchment area of a couple of hours away from Dublin: the logistical difficulties that arise. All the infrastructure is more expensive, and harder to get at this end of the country, and the catchment is far bigger up there. The core team all had many years’ experience of working festivals at home and abroad, and a wide range of experience in the field. However, it’s a massive subject area and there are always going to be areas you lack expertise and experience in… and that means you go through a series of very steep learning curves. Luckily, we have managed to gather a group of hard-working volunteers and professionals that are very supportive and giving of their expertise. In many ways, you have to know that if you step back and look at it, taking on an operation of this scale involves a certain level of insanity. Ultimately, you have to just jump in, hope you’re making the right decisions and give it your all. A bit like life, really.”

Building a festival from there across a number of years, the team worked on the essential elements of expanding Townlands’ reach – working on relationships with potential headliners, dealing with the scale on which the festival operates, and setting in stone an aesthetic for the weekend that has kept dedicated revellers returning annually. Woods gets into the nitty-gritty and the growing pains. “For a small independent festival, we started ludicrously big in our first year. We tried to do all the things that we had wanted other festivals we’d worked on to do. We’ve learned the hard way to show a little restraint.  In the first year, we started with nothing except ourselves and some bare field. We had to make make our own workshops, rebuild sheds for storage, and then make a stupidly ambitious Townlands fantasy world from scratch, using materials we scavenged from here, there and everywhere. In your first years, persuading bands to come onboard just for the love of it is quite a struggle, but we still ended up with some serious line-ups. It doesn’t stop at the bands: persuading suppliers to take the risk on an unknown has its challenges too. Thankfully, we’re a bit more time-served now, and it’s more of a case that we a daunting number of bands applying. Year on year, we have managed to change and grow, providing new twists for our participants, whilst still maintaining all the elements that make us stand out.”

While Townlands has always assembled something for all tastes across its weekends, the past year or two has seen it attempt to broaden its reputation for electronic music, booking a wide variety of headliners and local draws that this year includes Sister Sledge, Neil Barnes of Leftfield, Choice nominee Bantum and recent Kerrang! magazine featurees Bailer. Booking specialist Sami Beshoff goes into the balance necessary to put together a well-rounded festival. “In year one, we had eight stages, and funnily enough, we have eight stages again this year. But in year two, we had fourteen. We really bit it off and went for diversity. We want people to feel that there is something for everyone, we want everyone to participate, and find new music that they’ll love, across genres and styles. Building the platform each year. This year, we’ve gone with Sister Sledge and Leftfield, two old-school names that (a broader audience) will recognise and identify with. (It’s especially important) for our locals that we didn’t want to be perceived as just a dance festival. Each year, our locals have come and enjoyed it, warmed to us, and last year, our biggest area of growth in ticket sales was with them.”

That spirit of outreach this year saw the festival feature a Battle of the Bands across the county, putting on events in towns that have been otherwise starved of new and original music in recent years, like Mallow, Skibbereen and Fermoy. The winner, decided right after this issue was going to press, gets a spot on the festival’s new Rising Sons stage. Beshoff discusses the idea and the dividends it’s had so far. “I think this is huge for us. It’s been on the back burner for a few years, and it’s great to have Rising Sons as partners this year to facilitate this. We want to be able to give everybody that chance. There’s a huge amount of bands and a huge amount of talent in Cork, and to harness that talent, and give them a chance to be seen… just looking at the applicants for Mallow, for example, a friend of mine that I hadn’t seen play in six or seven years applied, and I was shocked.”

This year’s Carnival is a few weeks away, and when asked about his thoughts heading into the event, Beshoff is enthused. Things are on the up-and-up, with the emphasis this year being on improving the festival-goer experience. “I can’t wait. Ticket sales are strong, stronger than any other year. We’ve moved sites this year, so it’s quite a different show to put on. We left five stages behind last year for different reasons, and we move forward this year, with four new stages. Lots of change, but change for the good. The layout caters for the customer a lot easier: less walking, closer to your car, closer to the arena, and it’ll be a lot more intimate of an event. It’ll filled up better with sculptures and installations. A whole new Townlands.”

With the first four years of the festival nearly down, and a great deal of positive momentum behind it, Townlands Carnival looks set to be a pillar event in the festival calendar for new and independent music in Ireland. When quizzed about the future, however, Woods opts to leave some things to mystery. “Ahhh. now that would be telling (laughs). The feedback from last year and the buzz for this year is great. There’s a lot of competition, but we have something unique, and we are just going to build on that. Onwards and upwards. We don’t want to go massive. We want to get to our capacity, and just do what we do as well as we can.”