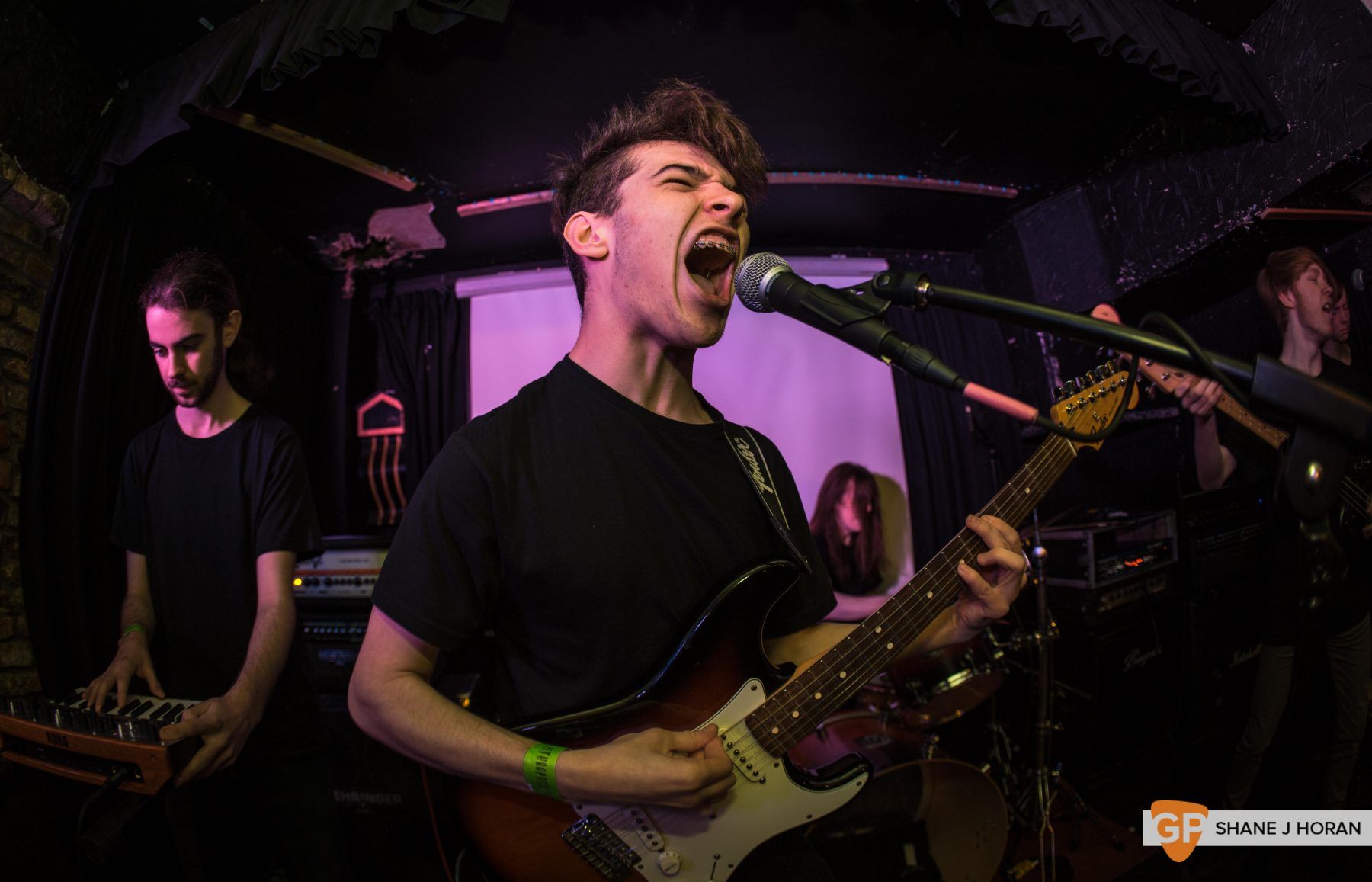 A group of talented and resolute young musicians, God Alone have set themselves apart in the past year, with an informed and eclectic approach to the nebulous ‘blackened’ aural vista, and a seemingly endless work ethic. Mike McGrath-Bryan speaks with bassist Cian Mullane about the band’s formation and future.

Some artists’ bodies of work are a product of internal monologue and vision, others, more so of their environment. For Cork black-metal/shoegaze/noise-rockers God Alone, the music lies somewhere inbetween, with those responsible among the first generation of musicians to “grow up with the internet” in earnest, and benefit from subsequent changes to music journalism, discourse and discovery. Bassist Cian Mullane speaks on the band’s formation and deep ties to a childhood rooted in music. “Myself and our guitarist/vocalist Jake (O’Driscoll) have been friends for most of our lives. We used to go to Tae-Kwon-Do together as young fellas. God Alone formed when we wanted to move in a heavier and more experimental, if you could call it that, direction after the breakup of a previous band they were a part of. We’ve always had the idea in mind of making metal away from the clichés and stereotypes of “heaviness” and “macho-ness”, and just creating music made by ordinary young fellas. We take great influence from genres such as techno, math-rock, indie and hardcore, alongside a great cultural influence from the northside of Cork City where most of the band reside. Basically sad metal with some dancey bits, I suppose. You can hit people to our music, you can dance to it, or you can cry, it’s all your own choice, we don’t really mind.”

As mentioned, the band stems from a community of young musicians that sprang from a small but fertile all-ages music scene in the city. From this foundation, the band’s debut EP, ‘Intivim’ was recorded in the Groundfloor studio, part of the YMCA youth centre on Marlboro Street. At the production helm was Ronan McCann, currently of post-punks Any Joy and one-time Carried By Waves/Painting By Numbers soloist. Having an experienced hand at the tiller from the beginning has helped the band established its identity. “We cannot sing Ronan’s praises enough. Ronan and the Groundfloor have been a tremendous help and support to us, through hosting our first gig, and working with us to produce our first E.P. It is a bit of a dose, as a young band, to find recording facilities on a budget, as we were all still in school, and Groundfloor is such a great help to young lads in Cork. Ronan is our fifth Beatle, and without him, I do not think our E.P. would sound half as good as it does, I think anyway. It was incredibly easy to work with him, as he saw our vision and was able to transfer it from our heads into sound. Also, he is very sound.”

From the E.P.’s release, the band has maintained a prodigious live reputation, gutting out lineup changes and very quickly becoming part of the city’s regular metal scene. For the most part of this year, in fact, the band has been gigging on a weekly basis, subsequently developing at a frightening pace from a niche band into one of the city’s most exciting prospects full stop. Although some very complex music has emerged from their soup of influences, for Mullane it’s been about the catharsis of making noises to begin with. “When writing and arranging music in practice, we tend not to keep live applicability in mind. We simply write and play what we would like to hear, whether it be dancey or heavy. In the only way I can describe it, a good part of our live set is just us battering our instruments. It’s a great outlet for emotion which is what we strive to achieve, sadness and anger with a bit of a laugh thrown in. Like life, I suppose.”

The band’s establishment in the local community has been made even more remarkable by the big story underpinning their past year. While their youth has been taken as a ready angle by promoters and local music writers alike, the reality of it, as well as their seemingly endless potential, hits home when one considers Mullane has just finished his state exams. “When studying for and sitting my Leaving Cert, I was still regularly rehearsing with God Alone and my other projects. There’s always enough time in the day for tunes, and it’s the only thing I really enjoy, so I try to keep doing it as much as I can. The Leaving Cert is overrated.”

Amid all of the upheaval and hustle, the band recently came up trumps in the Mammothfest Best Band Battle over the course of the spring, performing throughout the series and impressing festival producers. They now find themselves travelling to Brighton in the autumn to perform on their first international bill, a symposium of heavy and extreme sounds. The stage is seemingly set for new things for the Northside outfit. “We were incredibly surprised to even get through the first round. We couldn’t even believe it when we heard the news that we’d won, and will be heading (over) alongside our buddies (Dubliners) Jenova and (Cork outfit) Bailer. Most of us have never been to England, and none of us have ever played a gig in a foreign country, so it’ll be quite the massive experience. It’s always nice to play outside of Cork, as much as we love it and never want to leave. It’s a bit mental to believe really, can’t wait.”

Beyond the Brighton excursion lies the band’s immediate future, contrasting the music and potential that God Alone’s work and growing support from the city’s musical community with the next step for lads their age – college and the related culture shock. “Our debut full-length is being mixed at the moment, by Ronan at Groundfloor also. Alongside the release of this, whenever it does come out, we have a rake of dates around Ireland this Summer, supporting and playing with some of our favourite bands. What’s next, I suppose, is more tunes, and then back to school.”