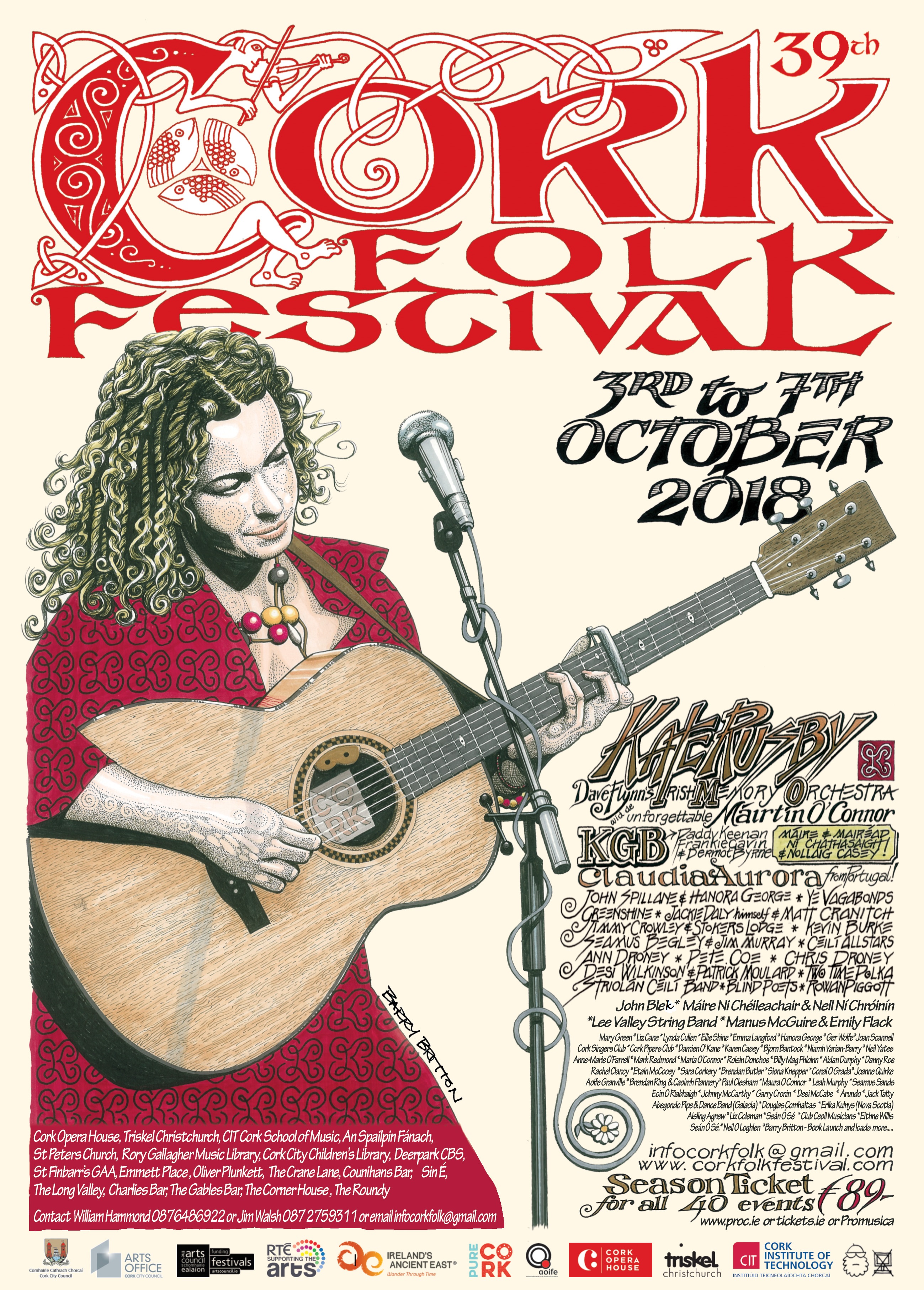 Gender equality, book launches, and the appearance of a new generation: the 39th Cork Folk Festival has all the makings of a defining year for the annual weekender. Mike McGrath-Bryan looks at highlights of the billing, and talks to some of its voices.

Over nearly forty years, the Cork Folk Festival has been the city’s premiere showcase for folk and traditional Irish music in its multitude of shades. This year, with forty-five gigs and events across fifteen venues, this year’s line-up is among the busiest in the festival’s history. With the festival’s landmark fortieth anniversary approaching next year, a huge cross-section of folk sub-genres, age groups and city communities are catered for, arguably setting the tone for the future of one of Cork city’s landmark cultural offerings.

The festival is underway, and last night saw the launch of legendary poster designer Barry Britton’s first poster book, with An Spailpín Fánach serving as the venue for a celebration of a lifetime forging the identity of folk festivals all over Europe. Showcasing his trademark Celtic motifs, spiritual fantasy themes & penchant for metapictures, the book features over ninety posters for music and surfing events, including the Hawaiian Triple Crown of Surfing, the Rossnowlagh Intercounties, Cork Folk Festival and Ballyshannon Folk Festival, the longest-running event of its kind in the country. As in the book, stories were told about the creation of many of Britton’s celebrated works.

There’s been a great emphasis in the new wave of Irish trad on cultural crossover, with bands like Slow Moving Clouds fusing Nordic and Irish sounds together with the modern post-punk tendency. This sets the stage for another international crossover tonight at the Triskel, when the age-old sean-nós tradition meets its Portugese counterpart, fadó, as singer Claudia Aurora headlines at the venue, making her Cork debut after her sold-out concert as part of the inaugural Songlines Fadó Series in London, last September. Much like the current rush of new blood washing through trad, Aurora has been heralded as the voice of fadó’s new generation, investing it with a bluesy tinge. Meanwhile Máire Ní Chéileachair and Nell Ní Chróinín open proceedings with their take on sean-nós.

While a lot of the emphasis of the festival is on the future of folk and trad, a powerful nod to the genre’s past occurs tomorrow night at the Triskel, as three of Ireland’s longest-tenured instrumentalists bring their KGB supergroup to the Folk Festival billing. Paddy Keenan (The Bothy Band), Frankie Gavin (Dé Danann) and Dermot Byrne (Altan) began touring as a trio in January of this year, and the trio draws on their historic songbook throughout their live performances, with violinist Kevin Burke accompanying.

Also playing tomorrow night at the Roundy on Castle Street, is John Blek, a singer-songwriter better known as the leader of indie outfit John Blek and the Rats. In recent years, he’s solidified his reputation as a prolific creator, and this year marks a milestone for him, with his first Folk Festival appearance, with Laura Ní Carthaigh in support. Speaking ahead of the gig, Blek discusses what the show means to him. “It’s a genuine pleasure to be invited to play the Cork Folk Festival this year. It’s an event with integrity and heritage that is held in high esteem in the folky calendar worldwide. I played a show in Birmingham last month and was informed by a couple in attendance that they have been making the pilgrimage to Cork Folk Fest for the last 15 years. That’s impressive! It’s an honour to be involved and to become part of its long and wonderful history.”

Saturday sees a multitude of afternoon events kick off at venues around the city, but among the highlights will be a speaking appearance from former Solas vocalist and multi-instrumentalist Karan Casey, at St. Peter’s at 12pm, as she continues to plough new furrows for gender balance and equality in folk with the Fairplé organisation. Speaking to your writer earlier in the year, Casey outlined the immediate need for this conversation in Irish music, and the talks that brought it about. “Many of us started asking questions about why there were so few women at many of the gigs. There is a clearly visible imbalance in the line-ups for traditional and folk music festivals and gigs, most are populated and dominated by men, even though the gene pool has many female performers available for work. We also started talking backstage at Celtic Connections 2017, about walking on and off the stage, and how awkward that seemed at times. Ewen Vernal, the bass player I often work with, mused “is it perhaps a gender issue?”. This really opened up the conversation that we were all afraid to have. The main people at the table were myself, Ewen, Pauline Scanlon, Niall Vallely, Seán Óg Graham, and Niamh Dunne. I was really surprised to hear the inside of my head being given a voice that night. It really got me thinking, and it gave me a bit of hope that perhaps something could be done.”

Saturday night at 7pm in An Spailpín Fánach, the conversation continues, as Greenshine’s Mary Shine presents Gals at Play, an all-star line-up of women in Irish folk, including Limerickwoman Emma Langford, a well-travelled singer-songwriter who’s been gigging furiously in recent months to promote her new record. Ahead of her performance, she waxed philosophical about playing Cork Folk Festival for the first time, and memories of her first Leeside excursion. “I still remember my first ever Cork gig. I used to hang out with the emo kids on Paul Street – tacky Penney’s corsets, lacy gloves and purple lipstick were all the rage – and I played music with my pal James. I remember joining him on stage for a couple of tunes at a battle of the bands called in the Half Moon Theatre. It was… I wouldn’t say it was the defining moment of my career, but it was interesting. I certainly don’t think I could ever have imagined myself playing gorgeous festivals like the Cork Folk Festival. I’m really excited to join the Gals at Play lineup, Mary Shine has curated a great show and I think everyone involved has something really special and unique to offer.”

The festival comes to a close this Sunday night with headliner Kate Rusby taking to the hallowed stage of Cork Opera House. As early as 1999, at the age of just 26, Rusby was named as one of the Top Ten Folk Voices of the Century, and has spent her career as a flag-bearer for folk in England subsequently. Defying convention to garner Mercury Prize nominations for her music, Rusby has made a virtue of refining her strain of folk songwriting, staying true to an acoustic-centric approach.

For more information, check out corkfolkfestival.com.