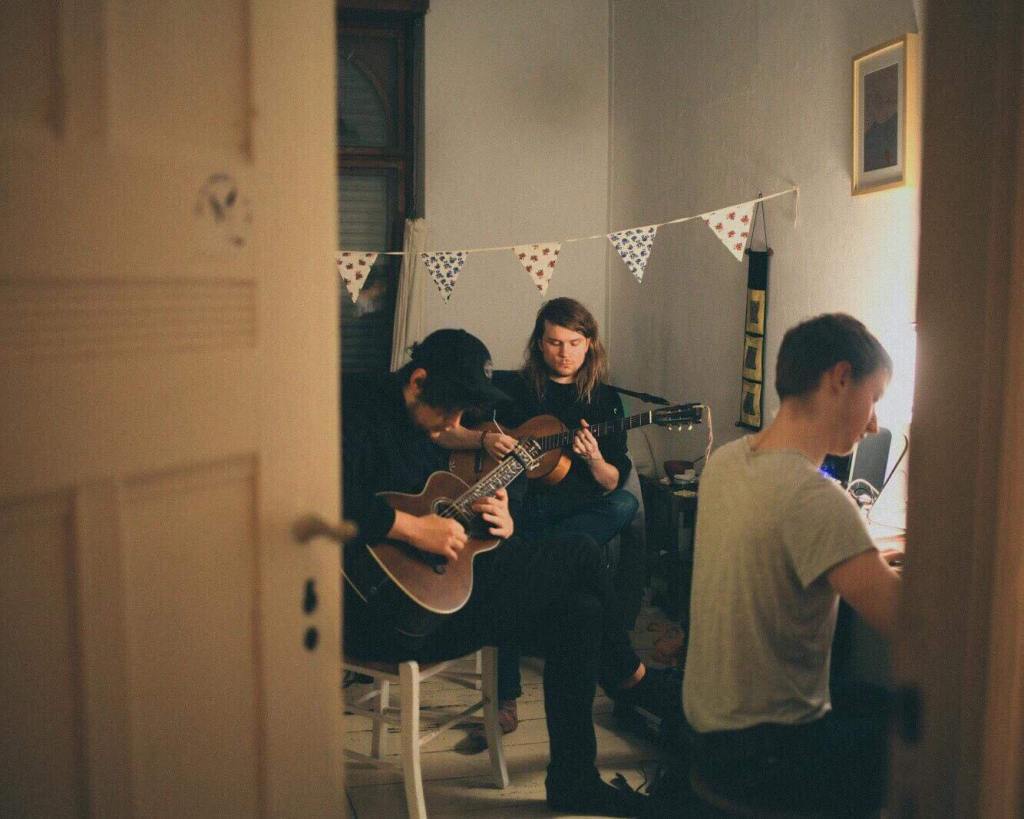 Germany-based folk-pop trio All the Luck in the World have travelled all over the continent and racked up hundreds of thousands plays online, and this month sees them finally ready to come home. Mike McGrath-Bryan speaks with frontman Neil Foot.

Perhaps the inevitable result of a set of circumstances that saw Ireland declare its young people expendable in the face of economic difficulty, a young diaspora of Irish emigrés scattered across the world over the course of the bad years, taking with them their art and ingenue. Stories are filtering back of the musicians and visual artists that settled elsewhere and took authorship of their roots, as well as their body of work, subverting the ‘wild geese’ narrative that romanticises such displacement routinely. Though formed in County Wicklow, where the band’s self-titled debut was recorded, folk trio All the Luck in the World in the end turned to Berlin for a headquarters from which they could realistically plan tours, and be at a continental centre of creativity.

This relocation has led the band to cut its teeth on touring European venues and festivals rather than building a bottom line at home, but also informed the band’s approach to creativity, keeping busy enough in the interim with live activity to approach second album ‘A Blind Arcade’ the way they wanted, says band founder Neil Foot. “Yeah, we’re really pleased with how the record turned out. The writing and recording of our first album was quite rushed and we were determined to take our time with this one, so there was no real chance of us being unsatisfied with it. In the end we probably spent a little bit too much time sitting with it, but we’re just happy to have it out in the world now.

Recorded between the band’s own ‘Haven’ studio in Wicklow and the Golden Retriever facility in Berlin, the band’s more relaxed approach this time around has resulted in a fine example of accessible folk, with textures alternating from brittle string-plucking and baskmasked chords to sweeps of strings. That cavalier mentality of self-direction prevailed, says Foot. “The creative process usually involved the three of us sitting around, showing each other musical and lyrical concepts, and then developing them together. There was no overarching theme to the record, we just wanted to create a collection of short stories that felt like they belonged together.  A good portion of the record was produced at home, we wanted to take a more DIY approach from the outset. When we were happy that we’d taken the songs to certain level, we brought our recordings to the studio in Berlin, where we worked with our producer Paul Pilot, and then back home to add some finishing touches.”

Since the album’s release in February of this year, some three years after work began on it, the band is happy with how things have been proceeding, with positive reviews and growing crowds at their shows. Sharing in that goodwill has been a big part of how the band has managed the slow trickle of success that’s been coming their way. “We’ve been fairly pleased with the reception online and at the shows so far. We’re always hoping to reach a larger audience of course, and that’s not always easy. But it’s great to go on tour and really feel the reaction to the music, and to meet the people who have been listening.”

Being based in Berlin, as touched upon earlier, creates a different angle on the perception and question of creating within the Irish space, at once being able to say they took a go at wider success, while perhaps not benefiting from the tight-knit structure of community that supports Ireland’s DIY music scene. What’s that like as a cultural, diaspora and business experience? “Of course we are Irish artists, but we don’t have a very strong support network here in Ireland, and we’re still relatively unknown, I think. We’re based in Germany, as is our management, distribution, and previous labels we’ve worked with. Most of our touring so far has been in central Europe, this is our first ever Irish tour actually. But yeah, looking forward we’re hoping to make more of an impact (at home)!”

Said excursion happens over the course of next week as part of a wider swing of UK/Irish dates, including a stop Friday week at the Roundy on Castle Street for a show promoted by The Good Room. Foot collects his thoughts on the upcoming dates, and coming to the Leeside city. “Yeah, we’re really looking forward to all of the Irish shows we have coming up, and it’ll be our first time playing in Cork city. There’s a pretty unique energy to Irish crowds, and that’s always exciting. We played Indiependence a few years back, and the crowd were fantastic, so we know there’s a great buzz for music in the county.”

With their second album in the can and another major notch on their touring belt complete after this run of dates, the question of what’s next is quite straightforward for All the Luck in the World. “After these gigs, we’ll take a few weeks off over Christmas. Then we’ll hopefully get straight into writing lots of new material at the start of the new year. We want to share a lot more new music with people in 2019.”