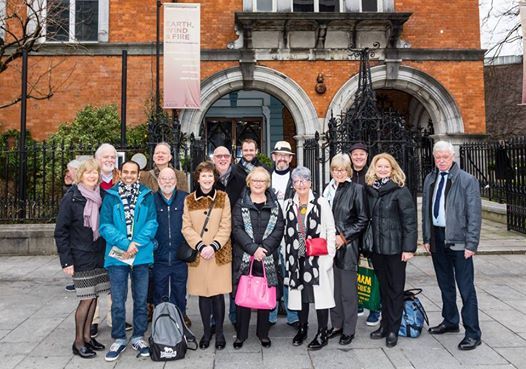 Since its first convening in 2011, the Cork Humanists group has provided a community space for non-religious Corkonians of all shades and self-designations. As the Humanist Association of Ireland convenes a national meeting next month at the Imperial Hotel under the group’s auspices, Mike McGrath-Bryan checks in with group heads and humanist celebrants Geraldine O’Neill and Ted Jones.

The changes that have overcome Irish society in the past two decades have been unprecedented, with the pace of same accelerated by the fall from broad social authority of the Catholic Church, the fragmentation of the post-crash political landscape, and a new generation dead set on bucking the precedents observed and furthered by their forebears, partially in response to the social legacy of austerity, as well as subsequent employment and housing issues. These circumstances have created the perfect conditions for the formation of a community space for skeptics and non-believers in Cork city to converge upon, to discuss ethics and compassion from a humanist standpoint, and how best to proceed about volunteerism, outreach and accomplishing shared goals.

Enter Cork Humanists. Formed in 2011, the group’s manifesto sets it out as a “secular community, based on a progressive philosophical life-stance”. Focusing on human rights and freedoms, the group aims to create an inclusive space for non-believers of all shades and self-determinations, across a wide and sometimes complicated spectrum of skepticism: atheists, agnostics, non-theists, rationalists, and other non-believers all have home at the group. Co-ordinator and humanist celebrant Geraldine O’Neill outlines the group’s origin. “The group came together under the auspices of two students from UCC, who were the first two conveners of the meetings, Aaron Keoghane and Annie Hoey. Both of them at the same time finished their study and ended up going away. Ted (Jones) and myself had been members, and came back, found out it needed revitalising, and we put our names forward and called a meeting. We started to gather people together, and that’s how it’s been since 2013. The group are meeting regularly since then.”

As the aforementioned changes wended their way through society and gathered pace in the last few years specifically, the group has continued organising and gone from strength to strength, currently meeting monthly upstairs at Meade’s wine bar on Oliver Plunkett Street. O’Neill comments on the development and further establishment of the group in that time, as well as the group’s outreach to non-believers around the county and beyond. “When we started back, we had people coming from Kerry and West Cork, coming from Tipperary. All of those areas have now developed their own groups, so there are regular meetings (in those places). We’ve seen people that felt very strongly about wanting to be connected to humanism set up their own groups in their own areas. We have a nucleus of fifteen members, ranging from twenty years of age to seventy.”

As much as things change, however, there is an innate tendency in human beings, much less the Irish, to gather at times of importance in others’ lives, one that has pre-dated organised religion in this country and around which the arrival and foundation of Christianity based itself. Demand in recent years has escalated in humanist celebrants to help mark these occasions – legal celebrants for weddings, officiators for secular days of celebrations like naming ceremonies or age-of-reason days, and overseers for funerals. O’Neill is a registered celebrant or ‘solemniser’ with the Humanist Association of Ireland (HAI), the only body legally recognised in Ireland for secular celebrations. “I’ve always been of the opinion that we as human beings need to gather to celebrate events. You can look at every seven- or eight-year-old in the world, when they begin to see themselves as autonomous bodies, with a certain moral code developing. Communion is seen by families as a way of celebrating the presence of this newly-emerging child in their lives, and we look at that and say ‘there is this need, can we meet it in a non-religious way?’ For weddings, we have thirty-two accredited solemnisers. There are spiritualists and others that can marry legally, but they have a religious doctrine behind them. Ours is secular. It is not our place to talk about anything but the couple, the union, and the ceremony being undertaken.”

The group is currently getting ready for a major national event among humanist and non-belief groups in the country, as the Humanist Association of Ireland brings its Sunday Gathering series of talks and debates to Cork for the first time. Cork Humanists are organising and hosting the event at the Imperial Hotel on South Mall, with speakers discussing the act of thought in the current era, but also marking the contributions of one of Ireland’s oldest charities to the city. Ted Jones, another co-ordinator of the group and its convener, outlines the process of putting the event together. “This year, to celebrate twenty-five years of being in existence, (the HAI) are more or less doing a roadshow about three or four times this year. What happens is we make an application to host it, they approve and we agree a date, and set about organising. We have two speakers for our meeting. We have a doctor, Coleen Jones, a psychiatrist, talking on the theme of ‘Thinking in a Modern World’. Your readers may be familiar with Catríona Twomey, of Cork Penny Dinners, and the ever-greater need for the services they offer. They are the chosen charity of our group, and we do collections for them. Their doors are open to everyone without question, and as humanists, we are very open to everybody. It’s part of the ethos.”

As the event approaches, and the group enters its ninth year, Jones collects his thoughts on the speakers and the occasion, and the bearings it has on the group’s 2019 and beyond. The group seeks to add to its numbers via community outreach, and furthermore to this goal, replenish its membership from among a younger demographic. “We’re delighted to be able to host it, show Cork in a good light, and it was taking a longer time for it to permeate in a meaningful sense throughout the rest of the country. But we certainly have a small but active group, but it is growing, happily. We’re delighted to have the opportunity to host the humanist family in Ireland. It’s being held in the ballroom of the Imperial with round tables, and after each speaker, each roundtable will have a chance to discuss among themselves and ask questions of each, allowing everyone to get involved and let the juices work.”

Cork Humanists meets monthly on the first Wednesday at Meade’s Wine Bar on Oliver Plunkett Street. HAI’s next Sunday Gathering happens on Sunday February 3rd at the Imperial Hotel on South Mall, with registration at 2pm. For more information on the group and upcoming events, check out corkhumanists.weebly.com.