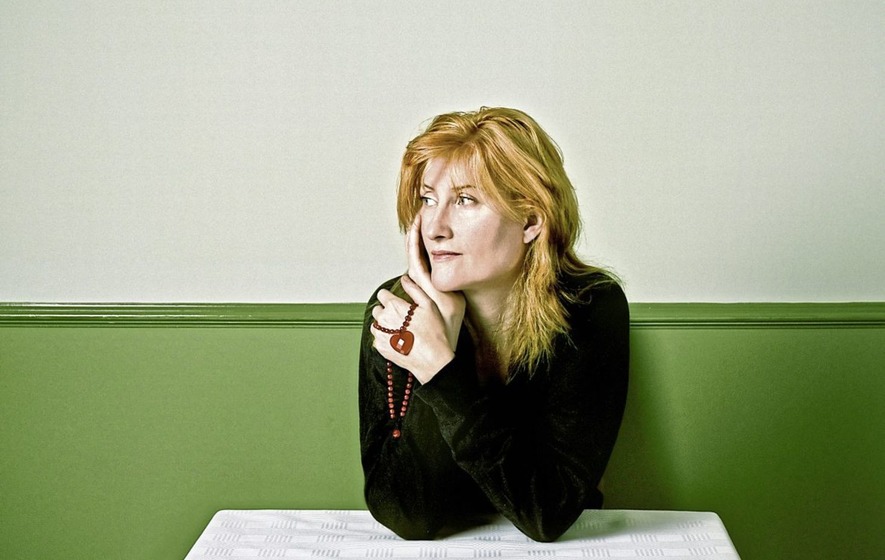 In a career that’s gone from pop stardom, to new-wave and post-punk, to folk and song-collecting, Eddi Reader has long been following her own instincts. As she prepares to embark on her eleventh consecutive annual Irish tour, including the Everyman Palace, she talks to Mike McGrath-Bryan about her new album, and being in the moment.

After a few initial attempts to reach Eddi Reader over the phone go unanswered, a warm, Glaswegian-accented voice comes hurriedly down the line, running a tad late from other interviews and quickly settling into one place again. “Ah, you’re from Cork! I know that accent!”, she chuckles when told who she’s being interviewed for, and from there, the floodgates are wide open. Coming from someone with the body of work that Reader has had – UK number one singles with eighties hitmakers Fairground Attraction, several BRITs, an MBE and time on the road alongside contemporaries like the Eurythmics and the Gang of Four – this kind of candour comes as a huge surprise.

New album ‘Cavalier’, co-produced by Reader and her husband/bandmate John Douglas, released this past September, and has been greeted warmly by press and blogs in the UK. Reader is content with how the record has turned out, both as a songwriter and in her capacity as a collector and interpreter of folk songs. “I feel proud of it, and surprised at how unattached I am too. I feel like a postwoman delivering a lovely thing. It usually takes me a while to drop my insecurities surrounding music I’ve committed to forever on a record, but ‘Cavalier’ has given me the confidence of a mother regarding the beauty of her newborn.”

A DIY effort from start to finish, the creation and co-production of the record is reflective of the entirely self-directed nature of Reader’s operation: sessions for ‘Cavalier’ were quick, with Reader allowing her collaborators freedom over their contributions, both in arrangement and performance. “It’s different, because it’s a different time, and I have tried a different production approach. When you have all the final say, there’s nothing to question your artistic decision, and often times there’s a ‘settling’ into old predictable habits in your choices, but a collaboration brings compromise and those two things, collaboration and compromise, although tough for a selfish musician, bring a richer, more expanded experience.”

Challenges typically present themselves in the handling of traditional material on any record, but for Reader, a sensitive and informed approach, as rooted in her politics and compassion for others as much as any adherence to precedent, was the way to go about it. “I didn’t find any of the trad songs challenging except trying to get Mike McGoldrick on ‘Maiden’s Lament’, I sent it to him and waited, and waited, then, just as I was giving up hope, Mike played me what he’d designed for a solo, thinking I had moved on and didn’t need him anymore,  but he had been working on it and it was magical, so we rushed him into the studio and grabbed it… I hear trad songs as brand new songs. Their history interests me, but it doesn’t define the limits of their worth as songs. I don’t hear songs as “now” or “then”. A song sung at 12:30 in the afternoon can manipulate our emotions in a different way as the same song sung at three in the morning. Some adult people have never heard The Beatles, all that will be brand new to them. Also, these trad songs sparked my creativity and newly written songs flowed out to support them. I think the trad and the contemporary songs sound like new songs to me. I called the album ‘Cavalier’ because the word also means ‘freedom’. Freedom to sing in whatever flavour my instincts desire.”

With a career-spanning compilation putting a full stop on her first thirty years in 2016, the question arises of the secret to staying creative and fresh, in the face of an industry that seems bent on freezing veteran artists, women specifically, in a certain place in time. Reader has blissfully distanced herself from both the trappings of ‘legacy artist’ status and a dependence on ‘the hits’ to anchor a live excursion in the eyes of casual music fans. “Don’t get involved in ‘industry’ too deeply.  Do your own thing, and focus on the musical moment as it is happening, and nothing else. Live your life, but when you want to be a musician you can’t survive if you think that only the music industry is gonna allow you to be a good one. Some of the best musicians I know have never had what’s known as ‘a deal’. They set their own gigs up, and finance their own recordings. Having a hit was and still is a great help. But sustainability comes from not trapping yourself. I’ve done plenty of shows that didn’t include one Fairground Attraction song, but not because I didn’t want to sing some of that collection, only because of lack of time, or the set not needing my history. My sets are dominated by free-flowing communication. I instinctively pluck my way through an evening’s performance, and I get surprised and excited at what songs want to be included.”

Reader is heading to Ireland as part of her eleventh consecutive annual Irish tour, taking on a deep itinerary of dates that take in venues around the country, in smaller, ‘secondary’ live-music markets as well as the usual cities. This tour is prologue to a busy 2019 for Reader, as follow-up touring for ‘Cavalier’ takes her to see old friends around the world, and fittingly, partake in new experiences as a performer.  “I head to Japan for a week, then a U.K. tour, which will take me into summer. And I fancy celebrating all my years by busking in the South of France as I did forty years ago. Then Jools Holland wants me on the road with him for October through to November, then it’s Phil Cunningham’s Christmas Songbook… In the middle of it all I’ll be doing what everyone else gets up to: expanding my joy.”