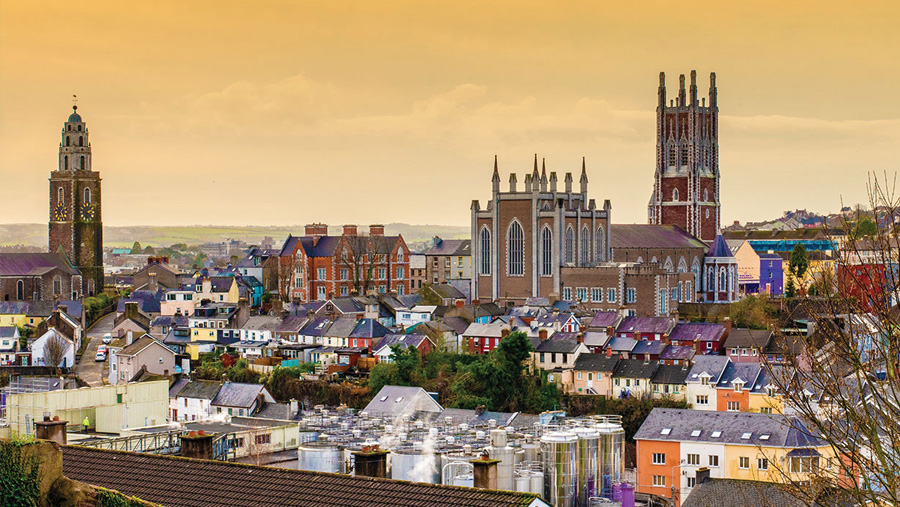 The culture of the city is explored, and the divisions that drive a wedge between starcrossed lovers are also the ties that bind, in Leeside Story, a new musical directed by John McCaffrey, featuring the voice and songs of Corkonian troubadour John Spillane. Mike McGrath-Bryan gets a chat in ahead of the show’s debut at Cork Opera House.

On either side of the river that wends its way through our beloved home city, two tribes eye each other suspiciously. Age-old rivalries have come to the fore, and seemingly insurmountable differences drive Corkonians North and South ever-closer to complete isolation. But as the light fades on a seemingly unending feud, in a Shakespearean take on Cork city, a Northside boy and a Southside girl emerge from the shadows. It’s the classic boy-meets-girl tale, plunged deep into the well of local humour, and placed amid the best light-entertainment stage traditions. ‘Leeside Story’, presented by the Leeside Drama group and debuting at the Opera House next week, draws on theatrical tropes and Cork’s cultural heritage to deliver a new work, embellished with local song and cutting Leeside humour.

Originally designed for smaller spaces in Cork city, the play’s story and vision quickly grew, catching the eye of programmers at the Opera House, and for director John McCaffrey, scaling up not only the production of the show, but its cast, was a challenge to be relished. “The stage in the Opera House can be daunting for many actors, but as I have found in the past, if you get used to working the stage, it’s no more daunting than a country hall. An audience of twenty people is the same as five hundred plus. Logistics have to be worked out, weeks in advance. Lighting plans, sound, projection needs, set design: never leave any of these items a week before a show.”

The Opera House’s generous stage portions must surely pose a challenge, though: while the play itself features a total cast of thirteen, the usual struggle with prop placement, and keeping the onstage action tight while emphasising the space available to them is a perennial challenge for playwrights, dramaturges and casts. The venue’s high-tech setup has done a little bit of the heavy lifting in that respect. “The main challenge for this show has been the inclusion of background screens and video. One has to be careful not to distract the audience too much with fancy backgrounds. Thankfully the Opera House has a lighting system second to none, so we envisage no problems there.”

As stated at the outset, the premise of the show plays on the oldest story of all: conflict, love and resolution, investing the cultural heritage of Cork with a readily accessible pop-culture narrative, as hinted at in the show’s title. Veteran writer Derry Cotter has taken the local vernacular and history, and brought it to a new life, according to McCaffrey. “Derry Cotter must have studied in in the same bizarre college of wit as John Spillane, I reckon. During a cold spell earlier in the month, John reminded me that the record for the coldest place in Ireland goes to Birr! Derry’s puns are legendary within UCC. One comes to mind from a previous play I worked with him on: ‘there are people dying now, that never died before!’ As a perfectionist, Derry often suggests changes to the script. Sometimes I say ‘okay’, other times I tell him to hop off. There is a cutoff after all, when you have to let your baby go. We see this show as a flagship production for Leeside Drama Group, and would hope to run it again in the near future.”

Music is a vital part of the show, including the involvement of Leeside legend John Spillane, armed with his encyclopaedic knowledge of Cork’s culture and song. Working with himself and musical director Jimmy Brockie, McCaffrey comments on what the collaboration has brought to the overall feel of the show, as well as the process involved. “Both Jimmy and John are a pleasure to work with. Jimmy has been working closely with anyone with a singing role to hone their skills. He is also adding wonderful musical colour to the show. As regards John, that man will walk on stage with guitar, and just do his magic.”

Spillane’s career has been well-documented, notable for the breadth and depth of his local knowledge and how it’s been implemented across a deep discography from which he’s drawn, not only for solo shows and regular residencies, but projects like this, which keep him going creatively. “I’m very happy that Derry and John decided on the songs, the context in which the songs are used. It’s an honour, and an honour to be involved in a play that sets out to be pure Cork, that I was the guy they went to for the songs. Dr. Con Murphy had a night to honour him at City Hall there lately, I’m getting a lot of that kind of stuff now.”

The experience of using four of his songs in a new context, while maintaining a certain familiarity in line with Cork light-entertainment tradition, was the end result of a process of working closely with writer Cotter. Contributing to the show’s creation, and influencing its use of Leeside humour, it’s only fitting that Spillane makes a few walk-ons over its course. “It’s very interesting. It’s a lovely crowd of people, and it’s nice to work with people that are different. We call it ‘amateur’ drama, but amateur drama is huge in Ireland. There’s a lot of people that are really good, and really passionate about it. It’s lovely to hang out with that (kind of) crowd.”

Just about a week from stage night, and with myriad concerns as a director to get addressed before doors are open, McCaffrey is chipper about his thoughts heading into the big show itself. Keeping things ticking over seems to be the name of the game. “So far, going tickety-boo! With a core cast of thirteen, and numerous stage and production staff to deal with, scheduling rehearsals has to be managed accordingly. Thankfully, the crew I have are dedicated, one hundred percent, to the production.” After this is done, it’s a wide spread of duties for the production team involved, including a dalliance with Hollywood stars in an unlikely location, and an immediate return to the grindstone with more new plays and productions. “No rest for myself. I’m stage-manager for ‘The Blarney Stone’ in April with Patrick Bergin in Macroom. I also know that Derry has further plays in the pipeline with Leeside Drama group, including another run at this show.”

Leeside Story debuts at the Opera House on Thursday March 14th, at 8pm. Tickets on sale now from €25 at corkoperahouse.ie and the venue’s box office.