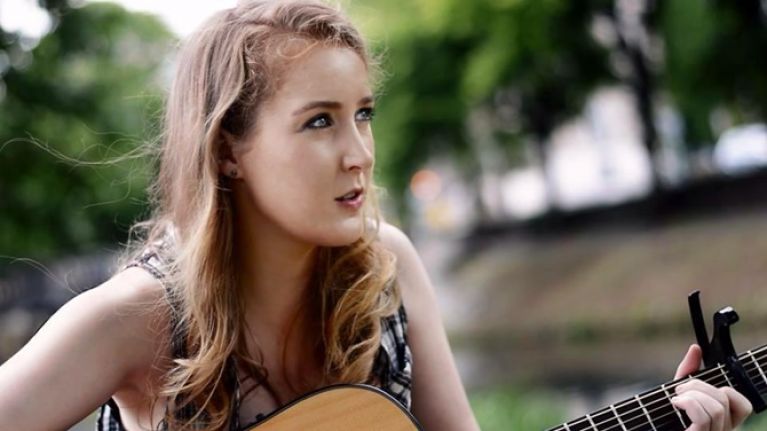 Having played a part in the Rising commemorations in 2016 with a ballad of her own creation, singer-songwriter Sarah Buckley is readying herself for a year of new material, and taking on new horizons in the process. Mike McGrath-Bryan gets a word in, inbetween rehearsals.

Patience is a watchword in the music game, especially when operating off your own steam. Things don’t always fall into place quite the way one might like when pushing away at the industry end, while timing and hitting a nerve with the Irish music community can make all the difference to an artist or a band getting started, in creating goodwill and a reputation. Between those two camps falls singer-songwriter Sarah Buckley, who’s been gigging away patiently for the last few years, putting an impressive number of road miles under her belt, including a couple of navigations of the Irish festival scene, including Electric Picnic, Vantastival and other summer-season weekenders, as well as appearances at Cork’s own Jazz Weekend.

Buckley’s debut single ’You Got Me’ rolled out last month, after two years spent getting a tranche of debut material ready for release. Following a strong run of gigging and festival appearances, the tune arrived with a premiere stream on Dublin entertainment mag Hot Press’ recently-renovated web presence. Speaking over the phone as rehearsals continue for upcoming live activity, Buckley seems relieved that her own tireless DIY efforts in getting material out to press and radio has borne fruit. “I suppose it was a relief. I’d the song written, and after working on music for two years, now was the time to get it out there. I was terrified to be producing my first one, but now that it’s out there, the next one will be less daunting, now that I’ve been through the process once.”

Taking no half-measures, Buckley went to work with material that was hard-mined from her own experiences and influences, heading to studio with engineer/producer Karl Odlum (Glen Hansard, David Keenan) and mastering engineer John Flynn (Bjork, among many others) over the course of the single’s recording. “Karl is well-respected in the music industry, and when you work with him, it’s easy to see why. He is really great at what he does, and made the process easy. He has a great balance of being able to give input without taking the song over, and technically, he couldn’t be better. We went through a few iterations of the song, as by the time I got to the end of a mix, I had learned just a little more and so, saw things differently! John is based in London and so I worked with him online, (but he’s) another talented man who made the process straightforward.”

The market for music media in Ireland has changed beyond recognition in the past decade or so, and as listeners’ tastes have fragmented and become more diverse, a great range of online publications and specialist print magazines have emerged over the years to give Ireland’s independent music community its due recognition, on its own terms. With so many options available that are more amenable to newer artists, and with Buckley garnering praise from the like of Dublin’s Goldenplec and Belfast’s The Thin Air magazines, it was quite a ‘get’ for a self-released record like ‘You Got Me’ to get its premiere via Hot Press, whose remit has traditionally been in major-label signings and legacy artists. “I’m working on my own, doing my own PR. There’s a lot you can do nowadays, yourself, until there’s something bigger than yourself to get people involved in, so maybe I didn’t have an enormous strategy (laughs)… I just thought, ‘that’s a great magazine, everyone knows it, it’s well respected, and it’d be great if they got behind it’. People do seek, I don’t know, a level of verification, that Hot Press and RTÉ can offer by coming behind you, people start to pay more attention.

Radio airplay and the aforementioned online exposure swiftly followed, much of it off Buckley’s own back, as stated. Cork’s RedFM, RTÉ’s online-only 2XM outlet and regional stations around the country were quick to pick it up for airplay on specialist shows, but with the aforementioned shifts in both listener habits and overall patterns of media consumption, it’s arguable that the radio business has become ever more risk-averse, with such shows often placed on quieter live slots, or as on-demand online programming. Buckley outlines how she’s tackled the airplay grind, and reaped dividends. “I emailed people that I thought would be interested in the song, and some people (then) contacted me for it online. It was great that a lot of local stations all over the country were happy to play it, and obviously its inclusion on RTE Radio One’s playlisting was a huge boost for the song, due to the audience size. As you say, it can be a difficult sector, with a lot of ignored emails, but in this song’s case, there was enough of a response to not pay an enormous amount of attention to those. There will always be different opinions with music.”

Placements of all kinds have, for better or worse, become a big part of widening an artist’s audience. In some markets, they can dominate the industry conversation, with your writer regularly receiving press releases from touring bands where television and film usage ranks as highly as critical plaudits and road miles. Buckley’s opportunity came with an appearance on RTÉ’s ‘Reflecting on the Rising’ series of gigs in Dublin in 2016, with artists performing newly-written responses to the conflict that changed the course of history. ‘Wedding Bells’, written as one draft in a Dublin city pub, inverts some prominent narratives around the event. “For the 1916 Easter Rising centenary, RTÉ put on a series of gigs around Dublin. It was a great day, and well attended. I was on a side stage in Smithfield, and so the pressure wasn’t huge where I was. Just a great day really, I played a couple of ballads and wrote one for the occasion, (which) was well received on the day. It could probably be considered the flip side of The Wolfe Tones’ song ‘Grace’. It tells the story of Grace Gifford’s short marriage to Joseph Plunkett, on the night before his execution for his role in the rising, from her point of view.”

We’re at that odd stage for festivals, where we seem to be every few years in the current climate: new events like Cork Sound Fair are steadily being announced and work begins on bedding them down into the national music calendar, while others, at the end of that initial period of experimentation, are simply reaching the end of their life expectancies. For Buckley, for whom upcoming excursions will be nothing new, it’s a matter of staying out there and reaching new people. “One of my highlights was Electric Picnic. It felt like a great achievement to just be accepted onto such an important stage. They’re enjoyable from a singer-songwriter point of view. I’ve always had positive experiences so far with the festivals. I’ve always played to people I haven’t played to before, and they’re always glad to be there!”

‘Wedding Bells’ finally sees a formal release on April 15th via all streaming platforms, two years on from its creation and the opportunities that have resulted. Taking everything that’s happened since for Buckley into account, she was quick to further an effective working relationship with Odlum and Flynn, parlaying their work together into a more streamlined recording and post-production process, befitting the personal nature of the material. “That story is very poignant, but all of those stories haven’t been told by the women on the other side. Getting married on the night before the execution, she was obviously very supportive in his story, in what he was able to do, and I wanted to have a woman’s perspective on things. The song didn’t really change, it was written in one draft, and when we brought it to the studio, Karl liked it the way it was. He added a few bits in the background, but it’s one of those one that came rolling out in the first draft.”

Sarah Buckley’s new single ‘Wedding Bells’ hits streaming services on April 15th, and current single ‘You Got Me’ is available now. Buckley hits the road in May and June, for more information and announcements, be sure to find her across the major social platforms, or on sarahbuckleymusic.com.