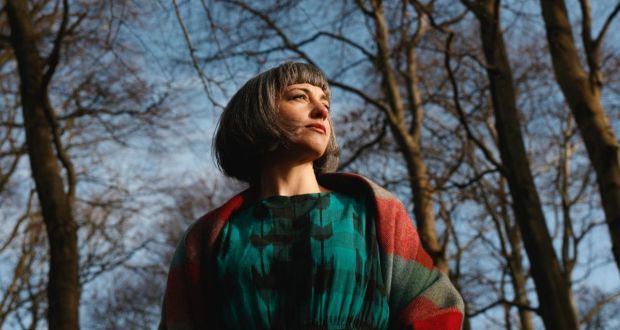 Inni-K, the working name of singer and multi-instrumentalist Eithne Ní Chatháin, brings a broad church of sounds under her remit. Parlaying a background in folk and trad music into contemporary composition, elements of wider folk, indie music of various hues and more experiemental fare permeate her work, playing to the strengths of a clear, yet distinct voice. Her penchant for progress has brought her to share stages with a gamut of established names, including Malian kora exponent Toumani Diabate, drummer Jeff Ballard, Frames man Glen Hansard, Liam Ó Maonlaí, Lisa Hannigan and many more.

Second album ‘The Hare and the Line’ has released this past month via Green Willow Recordings, marking the end of a four-year wait and heralding an expansion for Ní Catháin’s sound that makes itself felt right from the opening seconds of its title track, not shy of asking grand questions (‘how do you/I define her?’) of her own place as an artist and as a human being. With the album available now, the question of what comprises a ‘finished’ record emerges, chiming with her feelings on the album as a whole. “I feel very satisfied & proud, to have the new album completed, and to have it out in the world. I really look forward to performing the songs live over the coming months, at gigs and festivals, (and also) to see how people interact and engage with the songs.”

The creative and post-production processes differed this time around, coming together over the past year or so, after the jettisoning of an unreleased long-player. The disappointment of a body of work not coming together can be a difficult one to overcome for many artists, but Ní Catháin took the impasse and new start as a challenge. “I pretty much had the guts of an album of different songs ready to go about a year ago but something in me knew to hold off, they didn’t feel quite right. I think, in hindsight, they were a stepping stone in clearing the way to the new songs on this record, but it is always a little disappointing to let go of something you’ve been working on and face the blank page again. In doing so, however, I think something new opened up in me, and the songs on this album came quite easily once they came. They are, I think more personal in theme and tone, and feel quite different.”

Collaboration and co-writing opened up the process of creating the new record for Ní Catháin, with arrangements and post-production making all the difference not only for getting the record done and dusted, but for doing so in a manner that kept her own engagement up as a creator. “The whole process was a much less lonely experience for me than ever before. It was a lot of fun. Songwriting for me seems to be an alone endeavour, maybe necessarily so; and I do really enjoy that. But from the moment I brought the songs to my friend, drummer & main collaborator Brian Walsh, things started getting interesting. Brian was more involved in the makeup of the songs much earlier in the process than with my last album (‘The King has Two Horse’s Ears’), and I think the songs are richer for that.”

Post-production began after that whole process came to its conclusion, with producer and engineer Alex Borwick leaving his mark on proceedings. The motley crew decamped to a remote location in the depths of winter, with embellishments made at various locations thereafter, and the resulting mix of atmospheres resonates throughout the record. “We totally hit it off as a team, and within a couple of weeks, after pre-production work on the songs in Rathfarnham with Alex, and with Brian up in the lovely Tyrone Guthrie Centre in Monaghan, (we) headed to a farmhouse in Co. Wicklow with two jam-packed cars full of our gear for a week before Christmas, and got to work on the bones of the album… we kept working pretty much over Christmas, spending a day recording rhodes, organs and piano up in the stunning Hellfire Studios, in the Dublin mountains, and then in various guest musicians houses around Dublin. I was so happy to have such great musicians & friends join us for the project: Dónal Gunne on guitar, Seán Mac Erlaine on clarinets, Patrick O’Laoghaire (I Have a Tribe) on backing vocals, Caimin Gilmore & Cormac O’Brien on bass. It was a really fantastic collaborative experience and I couldn’t have asked for a better team.”

It’s eclectic company to keep, but Ní Catháin is no stranger to breathing rarefied air, having shared the stage with some of the living legends of folk musics from all over the world. Her comfort with operating within folk is displayed most deftly on the new record in the quiet, tape-warm sparseness of ‘Póirste Béil’, and it’s this ability to bridge gaps that has put her to the forefront of the new wave of trad and folk. “I’ve seen it mostly in Dublin, just ‘cause that’s where I spend most of my time, but I’m sure it’s the same around the country. It seems there’s more of interest in songs and tunes, in a stripped back kind of way, that they stand on their own. There’s definitely more pride, and an interest around it now, and so many fantastic singers and musicians.”

Ní Catháin’s use of bilingual lyrics is an important talking point regarding her place on the Irish music scene, as the mother tongue has made a steady re-emergence in Irish music. Rappers like MC Muipéid and Belfast trio Kneecap, dancehall crooner Ushmush, blackened metallers Corr Mhóna, and even Corkonian humourist Craic Boi Mental have all made An Gaeilge central to bodies of their work. It’s a point of pride for many people. “It’s great that Gaeilge is being used in different genres, and that people are finding it to be the expressive, poetic and beautiful language that it is. Again, like the resurgence in trad & folk music, it’s inspiring and uplifting to see more people take pride in our own language. I saw Kneecap perform in Inishbofin last summer, they were something else! (laughs)”

Just off the road from gigs in the US and Canada over the course of February, Ní Catháin and collaborators are hitting the road again, this time with a national tour to back the new record. This jaunt around the country includes a pair of Cork gigs, in Coughlan’s of Douglas Street and Levis’ village pub in Ballydehob, two modern-day outposts for forward-thinking folk. It’s the jumping-off point for the kind of interaction she relishes from a gig. “The Cork shows are the first dates of the Irish tour, and two more gorgeous, intimate venues you’d be hard pressed to find. I love both venues, and can’t wait to play them. We hope to raise the roof with the new tunes!”

Inni-K plays at Coughlan’s Live on Douglas Street on Friday April 5th, and at Levis’ of Ballydehob the following night. New album ‘The Hare and the Line’ is available now across all digital services. For more information, check out inni-k.com, and stay tuned to her social media presences.