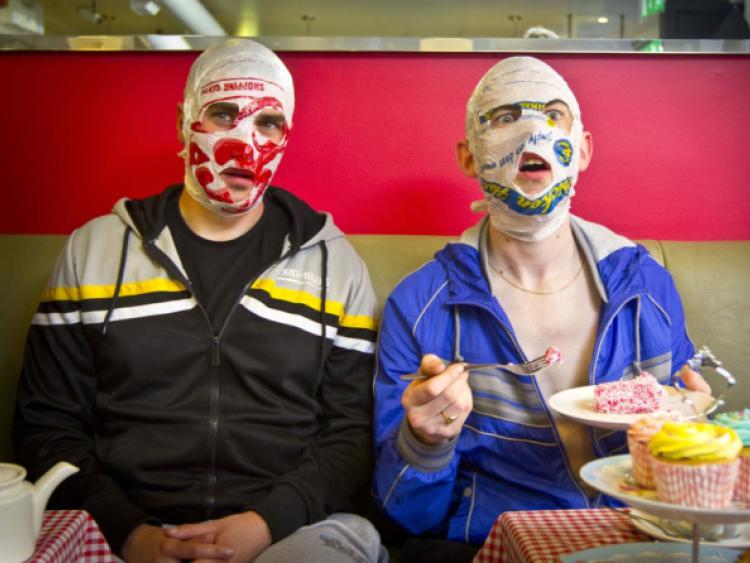 Ahead of new musical ‘Continental Fistfight’ visiting the Everyman Palace on the 31st, Mike McGrath-Bryan speaks with Blindboy Boatclub on theatre, social media, and throwing tinfoil at Beyoncé…

The Rubberbandits have written a musical. Consider that for a few moments. Limerick’s foremost exponents of recyclable headgear are headed to the Everyman on May 31st, and Blindboy Boatclub, one half of the award-winning duo, is excited when quizzed about what Cork theatregoers can expect from ‘Continental Fistfight’. “Well, it’s a musical about the bullet that shot Michael Collins. But what can they expect? A bunch of chancers up on stage for a higher ticket price than for a gig. What’s good about doing it in a theatre is, you get to sit down, and enjoy it, and hear everything properly. If it’s a gig, there’s pints flying around, it’s usually late-night and it’s not as good an experience. The only thing I can say is we’ve won loads of awards for our theatre shows, but we’ve never won an award for a gig, y’know? We’re more comfortable in a theatre setting now anyway, because it gives you more breathing space, it means you can develop the scripts between songs, know what I mean? There’s a lot more you can do. And it’s better for the audience to be able to sit down, chill out and just take it in as a performance, rather than a gig.”

Theatre was a bold move to say the least for the hip-hop duo, from the realms of gigs, sketches and hit singles. What brought such a change about? Says Blindboy; “We started off with this, really, when we went off to the Edinburgh Fringe, because that’s when we fully moved from doing gigs to doing things in a theatre setting. We went over to Edinburgh for a laugh, and we won an award for ‘Most Original Act’ in the Fringe, and that made us think “Jesus, we have a thing for this”. The thing with us, is we’ve been doing this a long time. We continually believe in always changing things, always changing things, never sticking with the one thing. We don’t consider things to be challenges, we just go ‘how can we do it in our way?’.

The pair have also made a huge splash across social media, with posts of theirs routinely going viral. Partially in-character, and mostly addressing major social issues, there’s a delicate balance between responsibility and humour, as Blindboy goes to pains to explain. “The thing is, everything we’ve always done, we’ve always had a strong social thing to everything we do. Right from the start, there’s always been a consciousness of social issues. The thing as well, recently, is we have the biggest social media reach in the country outside of the established media. So, I wake up in the morning and realise I have this really big voice online, and I just feel a responsibility that if I can, to do something sound. That’s basically it, because yesterday a lady got onto us, she lost her dog in Dublin. So, I’m left with the moral choice of sharing the photo of this lady’s dog, and the dog can actually be found, and he was found. So it’s nice to be able to do that, what else are you going to do? It’s more of a duty, y’know. We might as well do that, as well, because we’re not controlled by anyone. We post what we want to post. There’s no agenda.”

With so much of their work addressing current affairs and social issues, and a constantly-shifting artistic focus, it’s no surprise that the duo aren’t keen on looking back on their laundry-list of previous successes. “We’ve been doing this for fifteen years, since we were children. The thing is, you can only reflect on something when it’s taken away from you. ‘Cause I often think that myself, like, Jaysus, I’ve been on stage with Ice Cube, I’ve thrown tinfoil at Beyoncé’s arse. Seriously, like, I’ve done mad things, insane things. It’s weird, you spend your life wishing for things like that to happen, and when they do happen, in the here and now, it doesn’t impact you like you think it would. But when it’s gone and I’m an old man and I’ll look back, then I can go, ‘wow, what the f**k was that?’. I’ve seen mad things, man. I’ve seen Hugh Grant smoke hash in a pair of shorts. It’s the old, ‘you don’t know what you’ve got ’til it’s gone’.”

After this gig on the 31st, the lads are putting the head down and planning for the future, Blindboy keeping schtum when asked for any details he can disclose. “We’re going to give things a miss for the time being because we’ve something we’re working on. We can’t say anything at the moment but it’s pretty big.”

Any words, then, for the people of Cork ahead of your Bank Holiday visit? “We might slag ye all the time, but that’s just because you’re Limerick’s older brother!”