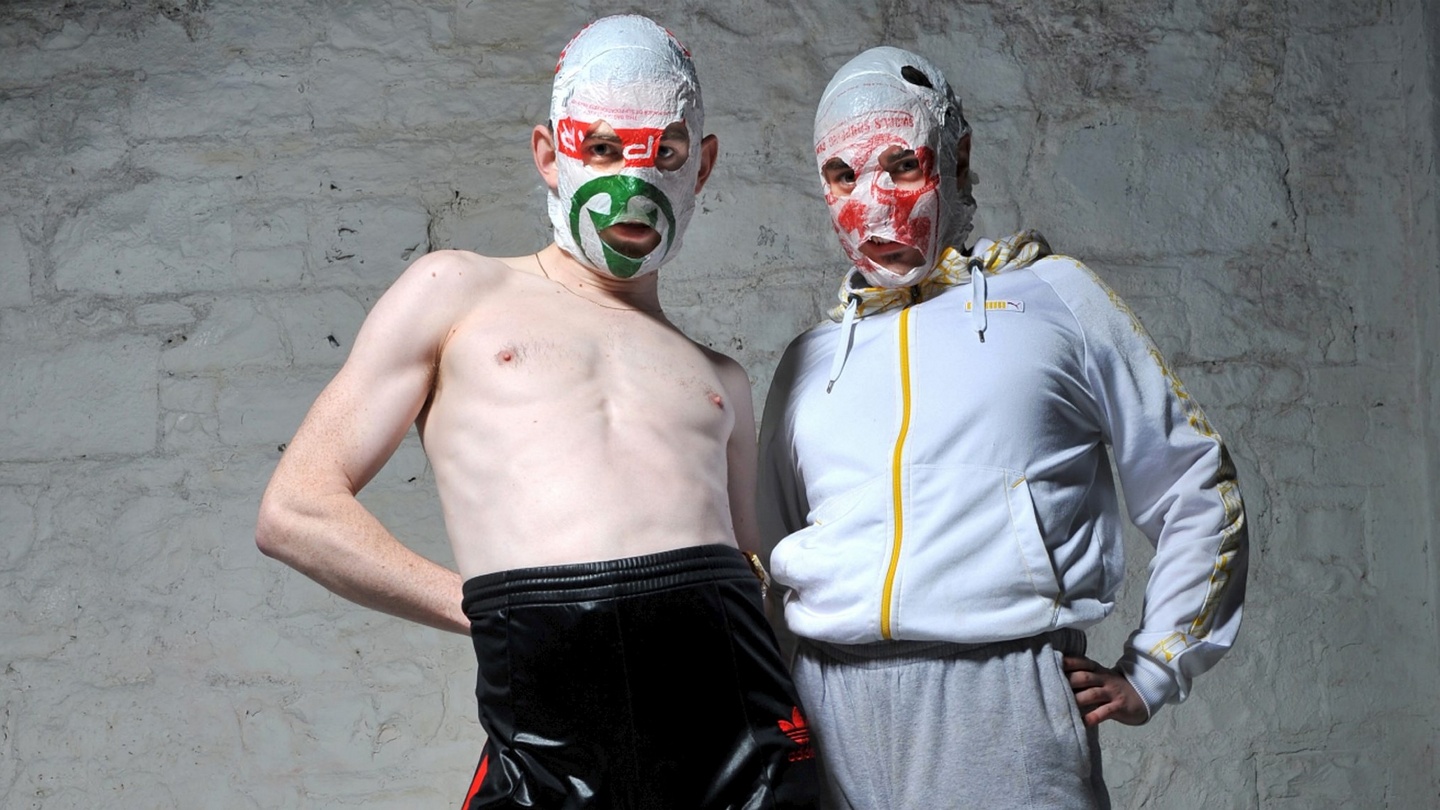 After selling out one show and announcing a second for St. Luke’s, the Rubberbandits top off a banner year with a trip to Cork. Mike McGrath-Bryan talks with Blindboy Boatclub ahead of their Leeside engagements.

It has to have been an exhausting year for Limerick comedy/performance-art duo The Rubberbandits. The duo of Blindboy Boatclub and Mr. Chrome, along with collaborators, have been at it for years, but their groundswell of support and grassroots influence has grown massively. Progressing from prank-calls and early tunes to post-austerity commentary, the Rubberbandits have made their thickly-accented voices heard, most notably the anti-materialism of 2012’s Horse Outside, and last year’s Dad’s Best Friend, a chilling examination of male mental health issues in modern Ireland.

The Rubberbandits’ Guide has just finished up after a four-episode run on RTÉ, that followed last year’s Rubberbandits’ Guide to 1916. A series of explainers, the show takes on overarching social and philosophical issues, from the nature of reality itself, to addressing Ireland’s changing attitudes to sex. It does so while taking in the spectrum of the Bandits’ self-created universe; the boys take slightly off-kilter advice from puppet odd couple Beckett and Joyce, and are witness to the ongoing self-inflicted suffering of the Trout of No Craic. But rather than an exercise in injokes, the Bandits cast their net out wide in balancing comedy and comment. The Irish pub/nightclub is recast as Attenborough-esque point of observation; reality stars sit befuddled as the pair test their perceptions of reality; and the early internet is characterised as a pond, replete with various dodgy activity in the reeds and pirated Metallica C.D.s floating at the surface.

The duo have dealt with RTÉ before in different capacities, but the question is, how different was it to get a show as far-reaching as Rubberbandits’ Guide to RTÉ, getting stuff green-lit, etc.? “We had complete creative control with the show. That’s the only conditions we’d work under. We know exactly what we want to do and how to do it, we rarely need outside help. At this stage, we’ve proven ourselves internationally enough for RTÉ to fuck off and leave us to our own devices. That’s what we did.”

An underrated aspect of the Guides has been the soundtrack – metal veterans Deftones, Nigerian synth-funk maestro William Onyeabor and vaporwave figurehead Macintosh Plus feature prominently, among others. Who managed to sneak those past RTÉ’s music department? “We had full creative control. RTÉ is great for music, in fairness, they have a blanket licence on everything except The Beatles. I’m a huge music fan, obviously. I love how a piece of music can change the tone of a scene on TV. We also knew that there were no plans for a DVD release, which would have meant losing the music in favour of library tracks, so we went mad with tunes. Picked some savage stuff for it. Samuel Beckett shooting James Joyce in the head while he’s listening to Deftones is what the TV license fee was made for.”

Another major piece of the Bandits’ year was providing ITV’s comedy contest show Almost Impossible Gameshow with play-by-play commentary and colour analysis. Blindboy addresses the subject of any concerns from producers unaccustomed to the duo, as to their voices, senses of humour, etc., while breaching how MTV been to deal with, for the American adaptation. “The UK version was great craic, we got to be very subversive with our humour for that. The American one that’s showing on MTV at the moment is a pile of shit, I won’t even watch it. We just did it to earn a few quid. The type of thing we were going for just doesn’t work with Yanks.”

But more so than any professional aspect of the duo’s body of work, the defining aspect of the year for the Bandits has to have been their increased visibility in Irish media, pertaining to mental health and the crisis we have at present. It’s a topic that official Ireland stayed silent on for a very long time before public discourse finally necessitated that discussion. Blindboy talks about how that has changed, and the Bandits’ role in that discussion, looking back on the last 12 months in particular. “We view ourselves as socially engaged artists. We view art, not just as a way to affect social change. The mental health crisis in Ireland is something that affects ourselves and all of our friends. So fuck that, if no one else was going to talk about it, then we would. None of the stuff that I say about mental health is novel or original, I’m just regurgitating what I’ve read from psychology books. We should be asking why our politicians aren’t informed on this stuff, rather than focusing on why I am.”

The other question pertaining to the topic is the now-hackneyed assertion that “the man with the bag on his face makes more sense than the man in the suit”. Boatclub and Chrome have utilised the lines between comedy and commentary expertly, but what further role does Blindboy see for artistic practice in Ireland as a tool of discourse and change, given the relative lack of support from officialdom, and where does he see the discussion going? “I think, with the internet, artists don’t need any support to get their stuff out there. To earn a living they might need support, but to create change, all you need is a message and the Internet.”

Boatclub and Chrome have been practicing artists from a very young age, and they’ve changed medium with the times, turning juvenile scutting into a fully-fledged, ‘dole-queue Dada’ artistic school of thought. But where next for Gas Cuntism? “We haven’t a clue, that’s half the craic. We’re both fairly handy visual artists. I can paint, and Mr. Chrome can sculpt. I’d say we might give that a lash. But there’s still loads to be done with music, theatre and writing.”

After selling out their first date on the 22nd of this month, the boys are playing St. Luke’s for a newly-announced second show on the 21st. After the big year it’s been, what can we expect from the live show this time around? “Two apes from Limerick wearing plastic bags on their heads, singing a load of songs about greyhounds, and a shower of eejits from Cork in the audience loving it.” And as an arguable career year comes to a close behind them, Blindboy is to the point about what further to expect from the Rubberbandits in 2017. “I’m writing a book and we’ll have a lash at a musical.”

Your writer and Blindboy have spoken before about Cork, before their Everyman performance of musical Continental Fistfight, and his feelings on the city. Blindboy further considers his relationship with the real capital, through the prism of his own home city. “Cork is class, it has the feeling of Limerick about it. But ye’ve a better buzz and ye have yere shit together. It’s like watching an older brother get a mortgage, while we’re still smoking rollies and combing our pubes.”

As our interview time draws to a close, one question remains to be asked, and that’s the plight of the Bandits’ close associate (and Salmon of Knowledge relative) the Trout of No Craic. Seemingly mired in his own ever-worsening misery, he reached his nadir during the Guides series, engaging in sexist & transphobic outbursts, and letting his various urges destroy his relationships. Blindboy, with a heaving sigh, simply proffers: “He’s trapped in the prison of his own negativity. The key to his escape is compassion, but he’s too busy sucking boobs for that.”

The Rubberbandits play St. Luke’s on the 21st of December, with CCCahoots in support. Tickets €25 from uticket.ie.