One of the sleeper hits of the Jazz Festival is set for upstairs in the Roundy on Castle Street on the Sunday night, as psych-rock outfit The Bonk launch their new album with Leeside jazzists Fixity in a double-headline show. Mike McGrath-Bryan investigates further.

Since debuting in earnest in 2015, The Bonk have been on a slow boil of gigs, including Cork’s Sudden Club Weekender and Quarter Block Party festivals, and intermittent single releases that have been received well critically. Led by O Emperor man Phil Christie, the project explores the influences of he and the revolving door of collaborators around him. Songcraft gives way to spontaneity, and slivers of jazz, Nuggets-esque garage rock and early psychedelia are heard amid the dichotomy of regimental rhythm and melodic liberties. Debut long-player The Bonk Seems to be a Verb has been released this month via Drogheda collective/label ThirtyThree-45. Christie discusses the process behind assembling and producing the full-length. “The album collects pieces from various recording sessions over the last few years. The arrangements are mostly based around rhythmic layers and improvised melodic lines. It’s an approach that allows for a nice variety of directions to emerge and so I thought I would keep going until things started to sit nicely together. The recording process was very good fun and very much driven by curiosity which was nice as the studio can sometimes become a frustrating place if you’re too rigid about the outcomes. It was a pleasure working with Brian at ThirtyThree-45. I came across the 24-hour digital radio station that he runs last year, it’s called ‘The Augmented Ear’ and I highly recommend checking it out! I noticed that he had posted a callout for submissions for the cassette label. As it turned out, we have similar musical inclinations, and we were both glad of the opportunity to work on something together.”

The album does indeed release on cassette, an increasingly frequent reoccurrence that seems to have outlived the initial novelty value of the mini-revival the format underwent at the beginning of the decade. But with so many options available now, more casual music consumers might be forgiven for asking what the attraction is. “With the tapes… there are sides, which is an upside for us (laughs). It’s nice to have to flip them over. Brian comes from an art background himself, and so I think he is interested in the materiality & design of the objects and packaging, and would like to continue building up an interesting series of releases. So, we were also very happy to be a part of that project. Besides that, half of the tunes were recorded onto a four-track cassette recorder, so there was something nice about reproducing those sounds as they were captured.”

The band completed its first round of touring in its current state in April of this year, and while people-wrangling of any scale can be difficult enough, getting a multiple-headed beast like The Bonk around the country must surely have presented challenges. “Given that the band can stretch up to seven of us, the logistical element of the operation can be a little daunting at times but I’ve really enjoyed playing the songs live, and it really makes a difference to have the full group involved. It’s kind of cool because all of the recordings are live versions in themselves, and so every performance stretches the tunes in different directions. This time around I think everyone is a lot more aware of those possibilities. It’s also just a very pleasant experience to meet people in different venues and hang out, it makes the hours of solitary bedroom mixing worthwhile.”

The band’s double-header with Fixity on Sunday October 30th sees the band at the centre of attention in one of the city’s pillar venues for alternative and experimental events, a status backed up by the relocation of PLUGD to the upstairs space in daytime hours. “We’re delighted to be able to have the gig in in The Roundy and very pleased that PLUGD is back up and running. It’s really a testament to all the great stuff that’s happening in Cork that a new home for weird noises and gigs has been provided so quickly since the closing of the venue at the Triskel Arts Centre – respect to all involved, it’s all good news. But yeah, we’re very much looking forward to that show. It’s the last gig of the tour and we’ll have completed four gigs on the trot with Fixity by that stage – the levels of achingly inane psychobabble should be peaking around then!” 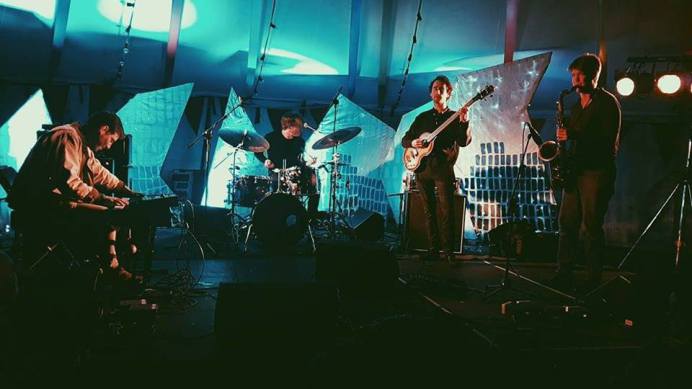 Channelling his experience as one of Cork’s busiest tubthumpers via stints with several Leeside bands, Dan Walsh’s Fixity emerged from the fringes of the city’s psych-rock scene, a maze of side-projects from which Walsh distinguished the project with sharp live turns into jazz-tinged explorations. Walsh and collaborators have had a bit of a break from the constant stream of releases that accompanied the band’s establishment in the past few months, the highlight of which was the release of studio full-length ‘The Things in the Room’ via Cork imprint Penske Recordings, on which Walsh is keen to comment. “It was a beautiful experience making that record, from start to finish. When the four of us were in the studio that day, we didn’t foresee someone like Albert (Twomey, Penske/PLUGD) having the passion and capacity for trust to bring it to peoples’ ears in the way that he did with a double-LP on Penske. We were commited to the music we played that day, and that’s still true. (Collaborators) Emil, Nils and Fredrik threw themselves into my music and the present moment with intention and strength of character, and when people do that, it’s a gift to all involved. There have been lots of heavy days of music since for Fixity as a result, and many more to come. I count that as a success.”

Walsh’s work at the helm of Cork Improvised Music Collective in the former Gulpd Cafe seems to have had a knock-on effect on the Leeside scene in recent years: improvisation seems to be returning to the fore, whether it’s Walsh’s projects, the slew of improv bands featuring Shandon-based Darren Keane, or the improvised nature of the work of bands like ooSe and Bhailiú. Walsh discusses the nature of sustainability and effort for the niche in the city’s scene. “I can only really speak for myself, and I’m not sure if improvisation has ever been a large part of what goes on in Cork, but I know that the improvisers I have known here have always been resourceful in putting on independent events so that they can get it done, and encouraging of others in its benefits as a means of music-making. A few promoters like Joe and Stevie in the Pav who put on STINK gigs on the regular, and Jim Horgan in Gulpd taking on CIMC have made a difference in giving myself and others opportunities to continue exploring it. It’s the kind of thing that grows when shared, I think, and that’s part of trying to uphold a rich tradition of its place in music in general if it’s something you are passionate about.” When asked about the next step for Fixity after bringing PLUGD’s jazz proceedings to a close, Walsh is far more succinct: “We’re going to record an album the day after.”