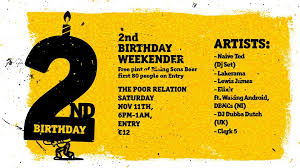 Cork’s community hip-hop outfit, Cuttin’ Heads Collective, celebrates its 2nd anniversary this weekend with a double-dose of live beats and pieces, including a big blow-out in the Poor Relation. Mike McGrath-Bryan checks in with Justin O’Donnell and Ross Herlihy on their journey so far and on whose head the blade falls next.

In the summer of 2015, a group of local hip-hop heads, promoters, DJs and other personalities were brought together for something of a summit after a run of recent hip-hop events went well: the plan was to bring those responsible together to join forces and concentrate on building hip-hop in Cork city on a community basis. The Cuttin’ Heads Collective was born, assembling local veterans like JusMe, formerly of the Impressionists and Ross Herlihy from the dearly-departed LiveStyles Fest, as well as promoters/bloggers like Shiv Skirmish, producers like Mikey B-Side of Run the Jukes, and rappers like Spekulativ Fiktion. Herlihy ruminates on the first year of the collective, and what experiences & lessons year two has yielded. “The first year saw us try lots of different things, in lots of different venues. We had a lot of fun, and were finding our feet. I think in the past twelve months we’ve really struck our stride, and have been putting on some great parties that our crowd want to see happening in Cork. We’re still experimenting with new ideas and working on some stuff, but we’ve a much better sense of what we’re all about.”

The Poor Relation has been home for a great many of the group’s recent excursions, helping establish it as a viable alternative venue in the city-centre at a time when venue closures have been the norm. O’Donnell discusses what makes it work. “The main thing it has going for it, is that they’re willing to put on the stuff other venues won’t. Metal bands, bass music nights like Undercurrent, reggae nights, (“slow dance music” night) Dim The Lights etc. After the closing of some venues around town they filled the gap, and gave nights like ours a new home. They’ve been a pleasure to deal with over the last year.”

The scene overall has been in very good health in the last year. CHC’s successes aside, this parish’s Stevie G has been doing well weekly with student night Good Music, platforming young DJs like NumberTheory, rappers like Jay Ronic and singers like Minnie Marley in the process. Meanwhile, Outsider YP’s new album ‘Alone.Insane.Alive’ was an understated but powerful platter, Spekulativ Fiktion’s return to action with beatmaker Mankyy is on the horizon, and even oddball rapper/cringe content specialist Oscar Benso finally went viral. O’Donnell is quick to add his take on the year in review. “I’m pretty hopeful about the scene in Cork. Beatmakers like Gaptoof (formerly Nxstalgic_) and Jar Jar Jr. are absolutely killing it. I’m excited about the new Switch X stuff. He’s always been an incredible rapper, but he’s finding his sound with the beats now. CHC resident Plonky finally has some stuff on the way. Ophelia is getting back to work on some new projects. She’s put together a very talented bunch of musicians. Proud to say I’ll be doing some work with them. There’s also a lot of young talent coming out of local youth workshops run by Garry and the crew at the Kabin in Knocknaheeny.”

The collective also contributed to this year’s IndieCork festival, premiering the long-awaited “The Truth about Irish Hip-Hop” documentary, as well as providing a stage for Spekulativ Fiktion and Mankyy to win the festival’s Music award. O’Donnell speaks about the doc’s reception. “I liked the documentary. To say previous attempts haven’t gone particularly well would be a massive understatement. They did a pretty good job of showcasing the current crop of rappers in the very limited time frame they had. As is usually the case with these things, it focuses completely on the rapping element of the scene. The couple of DJs and producers who feature are really only there to give their opinion on the rappers. I’d make the argument that rappers probably aren’t the most interesting thing about the Irish Hip Hop scene, but I suppose not everyone would agree.”

Furthermore to that effort, O’Donnell laid genuine claim to custodianship of history in the show-closing act of the group’s Indie effort: a history of Irish hip-hop, told in an all-vinyl DJ set. “There are so few Irish hip-hop things that have made it on to vinyl. It was really all about presenting what’s there in a way that worked. There’s all the old All City stuff which obviously featured heavily. They really defined the sound of Irish Hip-Hop in the early 2000s. While making it, I noticed how many of these artists are consistently left out of the Irish hip-hop conversation. Colm K might be the best hip-hop producer the country has ever had, and he’s never mentioned. He probably prefers it that way, but it annoys me. If you’re not hanging out in Irish hip-hop forums or working with Irish rappers, you’re written out of the history. Ghost and Jay, Hazo, Exile Eye, Captain Moonlight, G Frequency, Relevance… these artists never get the love they deserve. Being limited to the vinyl releases offers an alternative history I suppose, and it weeds out a lot of the rubbish.”

The group’s second birthday bash is incoming, with night 1 alone featuring Lakerama, Naive Ted and more. Being a dab hand with assembling festivals and other big excursions, assembling and pacing it comes logically to Herlihy. “The birthday is always an interesting line-up to put together. When we start throwing around names it can often become top heavy on 1 style of music. Its very easy to look at all the DJs we know doing amazing things, and trying to book them all, or conversely all the rap acts doing the same. It takes us a while to narrow down the list, and get a nicely balanced line-up together. The gig is around 6 hours long, so from a crowd perspective you need to keep things changing up, and try to schedule things to keep people engaged.”

The event is being hosted by broadcaster, kids’ TV enthusiast and general bon vivant Ray “Wingnut” Cuddihy and This Side Up rapper Shaool. Herlihy is effusive when discussing what each brings to the table. “Ray has been the undisputed king of event hosting in Ireland since he first hosted a Community Skratch Games. Not only is he hilarious, but he’s one of the most knowledgeable people with regards to Irish music, and especially the type of music we deal with. Shaool on the other hand is like an honorary Headcutter at this stage. We’ve always had a close link with This Side Up. It was after TSU played Cork that CHC started to come together, they’ve done a lot of work with Spekulativ Fiktion, were our first big gig in the Poor Relation and they absolutely rocked our birthday last year. It’d be weird for us not to have him at our birthday. Like Ray he brings a lot of fun to the stage when he’s up there, and we think the two of them will work really well together.”

With a solid two years behind them and a rep built up for their collective endeavours, the Headcutters are going from strength to strength. “We’re starting to fire on all cylinders at the moment. Our monthly gigs are a lot of fun and we’ll be keeping them up. It took a good bit of work to get that right, but now that we have it’s time to start some new stuff. We’re going to be starting an event for producers before the new year that will be much more of a social event than a gig. We used to run production workshops before, so it’ll be nice to do something with that community again.”