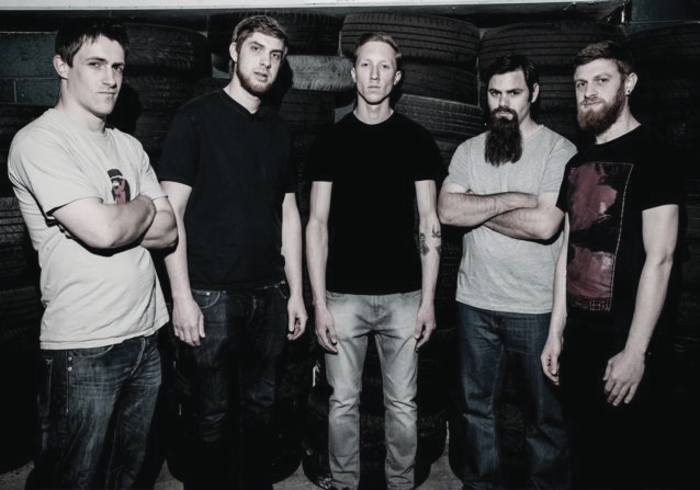 2017 was a quietly busy year for Galway mathcore/sludge five-piece Ilenkus, one that saw the much-feted physical release of most recent E.P. ‘Hunger’, and consistent live activity across the country in its wake. Guitarist/vocalist Josh Guyett surveys his feelings on the year that was. “It was a good year for us but also a tough one. We did a couple of tours in support of ‘Hunger’, despite the fact that it was a pretty demanding year for us personally, so all the work we got to do with the band felt particularly rewarding.”

‘Hunger’ came in for high praise from genre blogs and listeners alike, while the attendant touring worked out well numbers-wise for the band. Guyett goes into the record’s gestation process, and how it was met. “It was a really smooth process to be honest. We wrote the whole EP as one piece over the course of a couple of months at our rehearsal space in Galway. After figuring out where how we wanted to split the tracks up, we did a bit of pre-production and headed to the studio with our buddy Aidan Cunningham from Murdock. The tracking of the instruments was done quickly and with very few overdubs, which seemed to focus the sound. We were really happy with how it turned out and the response it got from the public.”

The physical release came about via a split with a series of labels around the world: WOOOARGH, Smithsfoodgroup, and others, including the band-affiliated Feast promotion house. How did these come together and how did it work out in the end? “Basically, after pitching ‘Hunger’ to some bigger labels without much luck we decided to try to fund it by getting a bunch of labels to all collaborate together. This works out great for smaller labels because the bulk of the costs are shared. It also benefited us by widening our exposure across their locations and networks. Overall I’d say it turned out well, all the labels are very supportive and the records came out looking and sounding great.”

Some of the labels also helped out with touring internationally to support the record, a process only given pause by the aforementioned break for attendance to personal matters. “To be perfectly honest that was the plan, but with 2017 being such a tumultuous year, we didn’t get to do as much touring as we’d have liked. We got picked up by a new booking agent earlier in the year; a mad bastard called John from a deadly band called Vasa – go check them out – so working with him has been fun!”

It’s been a healthy 2017 for heavy music in Ireland, also, and Guyett is effusive about the metal scene over the past twelve months. “Destriers are great, so are Bailer, who just put out a raging new track. Horse, Unyielding Love, Partholon, Soothsayer, Coscradh, Zh0ra, Ten Ton Slug. Our pals Bitch Falcon have been doing brilliant lately, Jenova impressed me when they played in Galway, and there’s a cool sounding new band called God Alone.”

Guyett has also had a busy year as a promoter with Galway-based gig house Feast, alongside Galwegian culture impresario Shane Malone and Tribal-resident Limrocker Steve Hunt, with some massive names in during the year and their domestic duties with Ilenkus’ release. “It’s been crazy and really cool. The highlight for me was getting to put on Melt Banana and Zu in the same week. Such great bands, and it was a privilege to bring them to Galway. We also have a distro set up at all the shows these days, and have been working away on a website for the label. It’s great to see Feast progressing and I honestly don’t know where we’re going right now, but we’re going!”

The band is on tour with God Mother for the rest of this month, a tie-in with the band that supported influencers Dillinger Escape Plan’s final gig. “I had first heard God Mother a few years ago when they released a split with Artemis, a UK band that we’d toured with, so last year I reached out to them on behalf of Feast. I asked whether they had any interest in coming to Ireland and when they said they did, we figured the best way to do it would be to tour with Ilenkus. We’re really excited for these gigs, it’s their first time in Ireland and a while since we’ve done an Irish run, so we are psyched for some great shows.”

The inevitable “what next” question is met with a holding close to the chest of cards, understandable considering the aforementioned revision of plans mid last-year. “We’ll be working on new material for sure, as well as touring. Beyond that I can’t say too much right now, but keep your eyes peeled.”