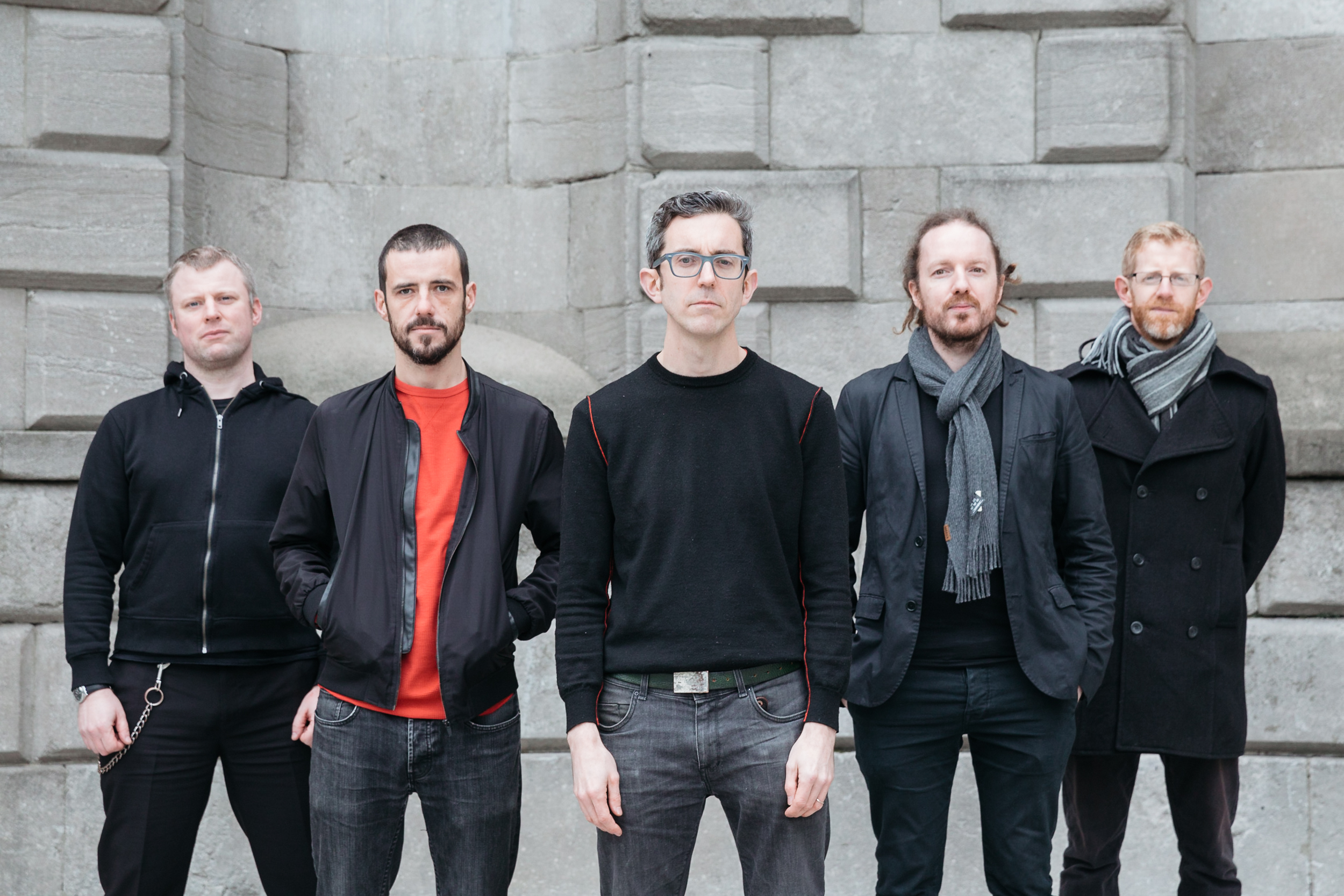 Retelling the story of the 1913 Strike and Lockout with an eighteen-piece guitar orchestra was always going to be a big ask. Allen Blighe and Enda Bates of Dublin folk-rockers The Spook of the Thirteenth Lock discuss the endeavour.

For over a decade now, Dublin-based five-piece The Spook of the Thirteenth Lock have been fusing the folklore and musical traditions of their home city with sounds and processes from further afield, with elements of drone and post-rock sitting alongside the foundations of folk and trad across their previous pair of full-length records. In addressing and recontextualising tradition during the ‘decade of centenaries’, though, The Spook of the Thirteenth Lock have set themselves some massive tasks in recent years. In 2013, the band undertook to document and chronicle the lived experiences of the hundreds of thousands of workers denied basic human rights in the 1913 Strike and Lockout. The final product, ‘Lockout’, is a concept album in four movements, finally releasing this March via Dublin/Sapporo label Transduction, after a number of live airings in the intervening years. Having lived with their work for a while, band founder/vocalist/lyricist Allen Blighe is content with the band’s work. “Initially it was planned as a short piece to tie into the Lockout anniversary but it grew legs! A lot happened, many were born, and many passed away in that time. We feel both happy and relieved to have created something original and ambitious, yet still quite cohesive.” Bassist/vocalist Enda Bates, himself no stranger to large-scale musical endeavours, expands on the size of the task at hand. “It was a big, complex project in all sorts of ways, both in terms of the writing and the production. We’re never stuck for ideas as a band, but the music does seem to take its own time. In the end, we’re very happy with the result and despite the logistical demands, it was really great working with an electric guitar orchestra.”

It goes without saying that anyone looking to tackle the story of the Strike and Lockout has their work cut out for them, being as it is an early milestone in modern Irish history, and in the story of organisation and struggle among the Irish working class. Taking a story with ramifications that lasted for generations, and that continues to reverberate in Irish society, and making of it a work for an eighteen-piece guitar orchestra was always going to be demanding on storytelling, compositional and logistical levels, according to Bates. “We knew we wanted to tell the story of the Lockout chronologically, and Allen had a list of key events he wanted to cover in the narrative. So we developed a timeline for the piece based on that, and it seemed to fall naturally into four sections. We already had some fragments of music written that seemed to fit nicely with certain events, and I had an idea for the opening in which each guitar comes in string by string and builds to big crescendo before dropping back down to just Allen by himself. From then on we just worked through the timeline, sometimes arranging existing ideas for the orchestra, and sometimes writing new material to fit the narrative. The story of the Lockout contains moments of great hope and unity, but also plenty of violence and despair at times too. So musically we tried to represent this through very consonant material and this big, open C tuning on all the guitars, alongside some very dissonant rhythms and harmonies for the darker moments.”

In building a timeline to work along and tell stories across the duration of an album, Blighe is keen to outline the extent of research done on both the story’s main plot, and on concurrent events of the time, aiming to present a fuller picture of a society in turbulence. ”Much reading was done on the subject. Padraig Yeates’ excellent ‘Lockout: Dublin 1913′ was a big influence. Also, Jer O’Leary’s impassioned performances of Larkin speeches really struck a chord, if you’ll excuse the pun! There were many challenges in compressing such a complex story into an album. For example, we just didn’t have time to fit in anything on the controversy surrounding the so called “Dublin kiddies’ scheme”, where the church blocked efforts to send strikers’ children to sympathetic English families to escape the deprivation of the Lockout. Some other themes, such as those presented on “Suffrage”, part of the 4th movement, were important to include. This deals with the struggle for voting equality, and Markievicz’s legacy, one as chequered as many of her male contemporaries but judged more harshly for no other reason than her gender. Matching the music to the narrative was a really interesting process. In the past we’ve written the music first, and then found lyrical themes to apply. For this project we flipped that around, which was a rewarding change of approach.”

There’s obviously a great resonance to the story today, over a hundred years later, with the current cultural impasse at the top of Irish politics and a working situation getting ever tighter for countless people since the introduction of austerity. Blighe discusses the similarities. “The decade of centenaries has been an interesting time to reflect on what exactly Ireland is. Where 1916 and the war of independence were about the struggle for national sovereignty, the Lockout and the Civil War were struggles to define exactly what this nation might be. Things are much different now but as the saying goes ‘history rarely repeats but often rhymes’. The Lockout was a struggle for a fairer deal for workers against a very hostile and callous bunch of Dublin employers headed by William Martin Murphy, head of the DUTC, the tram company and owner of the Irish Independent, who enjoyed the tacit support of the law and state. Today we have a few similar characters. Ireland since the collapse has been murky to say the least, and there are many questions around banking regulation, the wind-up of Anglo, NAMA deals such as Project Eagle, the sale of Siteserv, the write-off of debt at INM, the constant policing scandals as the disclosure tribunal continues to unfold, and most importantly, the housing crisis. There is a sense that the gains of trade union movement are being systematically stripped back in the name of competitiveness in a system that exponentially breeds inequality.”

While that might seem grim, Blighe continues to outline what can be done domestically, and what lessons can be taken away from previous popular mobilisations. “Our fear is that if a positive left wing movement, in the mode of the Water protest movement is not enacted to deal with this inequality, then we will see a slide to the far right. Irish nationalism has always had an element of Connolly’s vision for social justice. The far right are chipping away at this, and the high level corruption and growing inequality feeds this. A cynic may say that power corrupts, and that a system needs corruption to function. While in the many snares of national debt, the overreliance of tax avoidance schemes etc., there may be no hope for huge change. However, while waiting for some broader international change, there is plenty we can be doing. The water movement proved that ordinary people can organise and effect change. The housing crisis must be dealt with in a similar fashion. We can do this with the same determination and belief if we try. In a similar fashion the political and legal corruption can be challenged successfully. These goals are pragmatic and realisable.”

Another anniversary dealt with in recent years is the Easter Rising, which the Spook tackled in a shorter-form piece, entitled ‘Bullet in the Brick’, also released via Transduction in 2016. Being that the label is based in Sapporo, Japan, it’s surely an odd arrangement to co-ordinate a release, let alone pressings, deliveries, etc. Blighe explains. “Transduction is the brainchild of our good friend Patrick Nesbitt, a Finglas man relocated to Japan. He’s a veteran of the Dublin music scene since the late ’80s, and despite the big distance he has a keen interest in the Irish music scene. Talking to Nez on a VOIP call the other week it felt like he could have been five minutes up the road. Distance has fewer implications with technology and it’s been interesting to see how much of the process of writing, recording and releasing this album has been accomplished online, from us recording demos in different countries, arranging mastering with Balance Mastering in the UK, or Nez ordering duplication in the Czech Republic from Japan! Nez is a true music fan and enthusiast who had support independent music in Ireland and Japan for a long time now. We’re very lucky to have him behind us.”

With a date in Dublin’s Pepper Canister Church confirmed for March 16th, and further national touring to be announced for June, it’s a busy time for the Spook of the Thirteenth Lock. Not that it’s stopped Blighe and crew from making yet more plans. “Beyond this record, we’d love to keep playing electric-guitar-orchestra shows. It’s an incredible buzz to make such a big sound with such a big bunch of friends! However we’re also looking at stripping back toward the original five-piece line up for something less complicated. Ideas are also building for the next record, which may be something more rooted in Faerie and otherworldly myths, than history.”

‘Lockout’ is available on March 16th online and physically via Transduction Records.