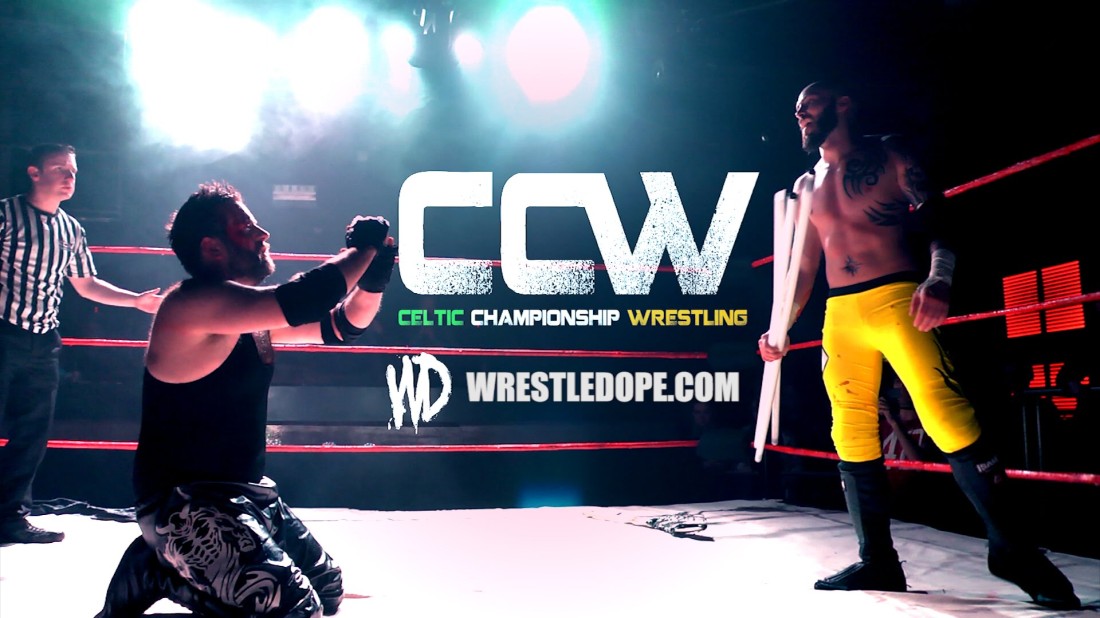 Four years old and growing exponentially, Celtic Championship Wrestling has overcome the odds to find a regular hometown audience among Cork city’s fight fans. Mike McGrath-Bryan speaks with promoter/performer Lee Cahalane about the ring, the business, and the fans.

“The virtue of all-in wrestling is that it is the spectacle of excess. Here we find a grandiloquence which must have been that of ancient theaters. And in fact wrestling is an open-air spectacle, for what makes the circus or the arena what they are is not the sky (a romantic value suited rather to fashionable occasions), it is the drenching and vertical quality of the flood of light. Even hidden in the most squalid Parisian halls, wrestling partakes of the nature of the great solar spectacles, Greek drama and bullfights: in both, a light without shadow generates an emotion without reserve.” – Roland Barthes

Professional wrestling, both as pop-culture pillar and sporting performance art, is approached with a double-standard that may not necessarily be applied by casual viewers to other venues of theatre, popular culture or athletic exhibition. Like any other performance art or athletic endeavour, pro wrestling is an acquired skill, one requiring hundreds of hours of practice to perform safely in the ring, and whose idiosyncratic narratives and logic are inherited from generations of adjustment and change out of it. Perhaps in reaction to the grand debate regarding “worked” (pre-determined, as opposed to “fake”) combat, or simply identifying with some aspect of the presentation or the athletes/personalities of the time, pro wrestling has lasted the test of time, drawing a fanbase from across the socioeconomic spectrum as generations have passed. From the strongmen of the genre’s 1920s birth, to the “skill boys” of British rings in the sixties and seventies, to American-style “sports-entertainment” from the 1980s on, served up by the Technicolor travelling show that is World Wrestling Entertainment, to today’s multicultural and layered worldwide panorama, it’s a genre that teeters on the precipice of mainstream acceptance and cult following. It’s in this space that Skibbereen man Lee Cahalane discovered a passion that drove him to start an independent wrestling promotion in Cork. “I’ve been a wrestling fan for as long as I can remember. Started really getting into it during the Attitude Era of WWE, and have loved it ever since.”

The rough-and-ready shock TV of the 1990s informed WWE’s on-screen product, as it jostled for television time and licensing fees with such titans as South Park, Jerry Springer, and Buffy the Vampire Slayer. Anti-heroes like beer-chugging, management-harassing “Stone Cold” Steve Austin and the man that would become The Rock propelled the profession to the top of American cable television as the last millennium drew to a close. As the new millennium began, the seeds of Irish pro wrestling were sown in companies like Irish Whip Wrestling and NWA Ireland, in tandem with the return of the genre from obscurity in the UK. It’s from these pioneers that Cahalane learned his craft, as we find when he provides a little insight into his experience in the wrestling business prior to establishing his company, Celtic Championship Wrestling. “I didn’t have a major amount of experience pre-CCW. I promoted two wrestling events before CCW for another independent promotion in Ireland, but that was it. I had to learn the business from scratch, and surrounded myself with experienced members of the Irish wrestling scene in order to do so”, muses Cahalane, referring to athletes & that came through the doors in various capacities, such as Ross Browne, Blake Norton and Bingo Ballance.

Cahalane began organising and promoting pro wrestling cards in Cork city in 2012, seeing a gap in the market as a fan himself, and seeing both an opportunity on which to capitalise & the entry point to the industry he loved that had eluded him and others over the years. “I always wanted to be a pro wrestler, as opposed to a promoter. I realised one day that we hadn’t seen wrestling in Cork in years. So I took a gamble. I invested money into a show to test the market, so to speak, and fortunately it got a great response. We have now ran almost forty events in four years, have a fully operational training facility for people to learn pro wrestling in Cork city, and I am now also doing what I’m passionate about, which is being an in-ring competitor”, enthuses Cahalane, portraying a corrupt promoter under his own name, and heading up a faction known as The Establishment, cosseting himself with villainous talent, loyal to his own ends.

Shortly after the promotion started rolling, CCW started taping their shows for YouTube, at present for free viewing. With no access to regular television slots with which to set up and advance storylines, promote upcoming shows or feature merchandise, UK and Irish independent companies have taken to the world of on-demand streaming to counter both apathy from broadcasters, and the inexorable retail DVD slump. Indeed, the industry’s major players, such as WWE and New Japan Pro Wrestling have already begun future-proofing themselves, using subscription services to counteract piracy and declining ad revenues from legacy media. CCW hopes to follow suit. “We have taped almost all of our shows over the last four years and the plan is to indeed have them available to view on a on-demand service as well as DVDs. YouTube is a great resource to show the fans what we’re all about, and to give them the opportunity to follow our stories as they unfold.”

With the foundations laid, Cahalane set about founding a training facility, the CCW Academy, with the help of various Irish and international wrestlers as coaches and visiting tutors. The rigours of the ring are different from any martial art or pugilistic exercise, as trainees require not only ring savvy and spatial awareness to perform safely, but theatric psychology, such as remembering where cameras are placed, and communicating facial expressions & body language to a live audience. Falling between two pews as it does, the school has seen a high turnover. “Pro wrestling isn’t for everyone. We see a lot of guys come and go at the Academy but we are also developing some amazing talents, a lot of whom have been there since day one. The training is hard, but that’s to be expected with any physical sport. For those that are truly passionate and motivated, to be a pro wrestler it can be the best experience of your life.”

In recent times, CCW has also established a second brand, CCW Riot, which has presented an Attitude-adjusted alternative to the usual family-friendly matinee wrestling shows, pitting their own homegrown talent against independent stars of the UK and European circuits in a more raucous atmosphere ramped up by home venue The Kino’s BYOB status. How has Cahalane seen the difference in crowds at the Kino and, say, the more family-friendly audiences? How does story-telling in and out of the ring differ? “As far as storytelling is concerned, we remain consistent with the stories that are showcased on our family shows, but we allow the product to be grittier, and explore more adult-themed areas. The crowds are great in both the family and over-18s events, and they really get into the action. The opportunity to work with international talents is fantastic not just for our own home grown talents to mix it up and learn from, but also for the fans who always look for the most competitive and entertaining matches possible.”

The company has a Hallowe’en show on October 22nd, another CCW Riot affair, to be entitled Nightmare on Washington Street. Cahalane, in time-honoured wrestling fashion, keeps his cards close to his chest, with the event’s matches yet to be announced at the time of interview, but insists that the brand itself, and the atmosphere it engenders, is an attraction in and of itself. “Expect to see all the top CCW stars from here in Ireland and Europe. Expect us to go the extra mile to entertain our loyal fans. Expect an alternative great night of entertainment!”

And so, we get to the elephant in the room when discussing the nuances of pro wrestling for a wider magazine audience: the derision the artform receives from various quarters. Written off as “fake” in the same breaths that carry excitement for TV boxsets, or “reality” shows, or dismissed as redundant Americana by those not cognisant of the global reach of the artform, pro wrestling deals with stigma that negatively affect its progression and development, from stereotypes of its fanbase, to broadcasters unsure of advertising revenues from same. Cahalane dismisses critics of the genre. “I’ve said this many times, you’re either one-hundred percent a wrestling fan, or you’re one-hundred percent not. I don’t worry about the people that don’t appreciate pro wrestling, my only concern is the passionate wrestling fans of Ireland. To us, wrestling is the coolest thing on the planet!”

Celtic Championship Wrestling presents Nightmare on Washington Street at the Kino on October 22nd. For more info, check them out on Facebook and Twitter @ccwrestling1.