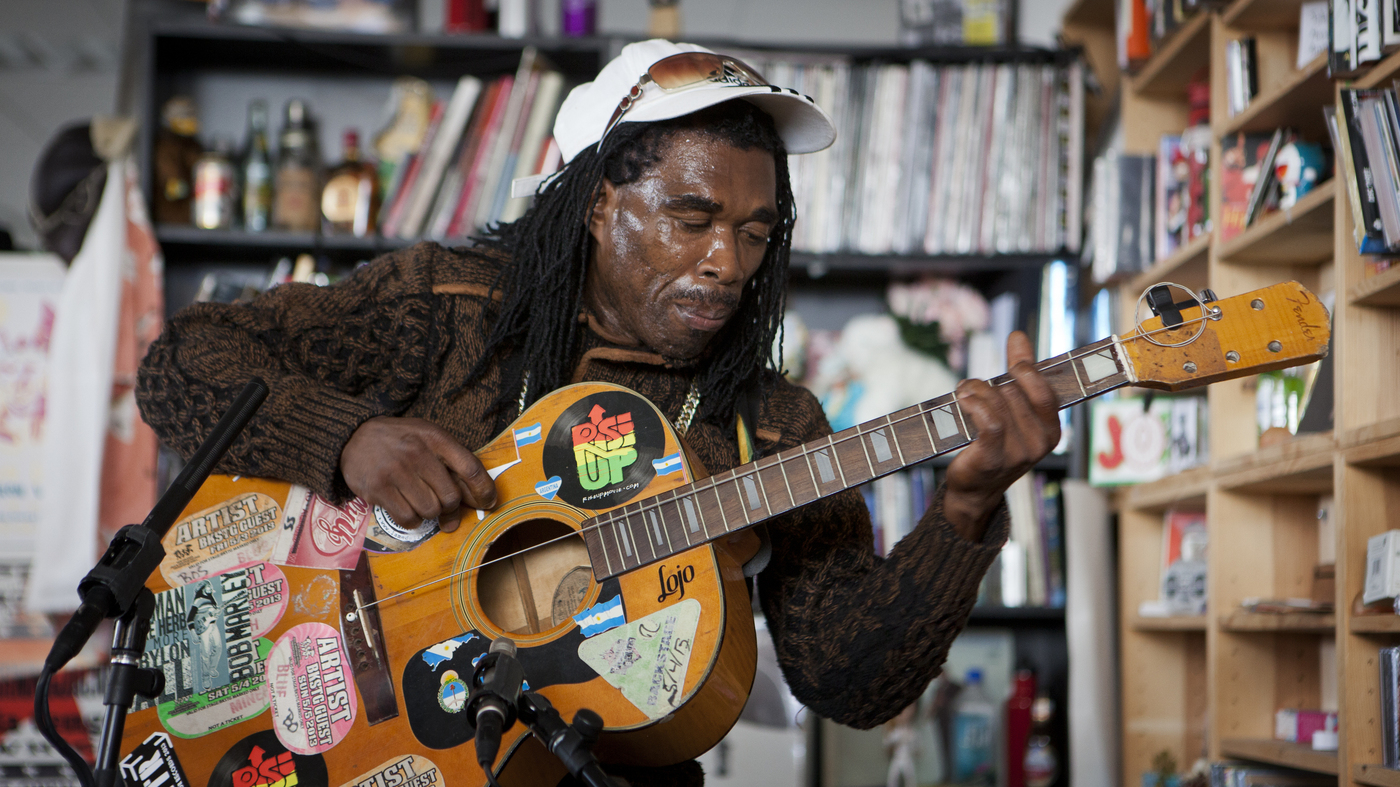 In the lead-up to his upcoming appearance at Townlands Carnival festival in Macroom, YouTube star Brushy One-String talks to Mike McGrath-Bryan about his life, his music, and how a chance encounter brought him his fortune.

The story of Brushy One-String’s ascent to musical notoriety wouldn’t go amiss in the canon of the great musical underdogs: the orphan child of musicians, including famed reggae vocalist Freddie McKay, Andrew Chin’s own journey of musical self-discovery led him down several creative cul-de-sacs, but while dealing with illiteracy and other external issues, developed a keenly-honed balance of reggae fundamentals, soulful vocals and wider musical reference points. The one thing he needed was a hook, something that would mark him out in an island with a surfeit of musical talent. Then it came to him in a dream. “I got a vision one night that I should play a one-string guitar. When I went to tell my family, they were all laughing, but my uncle’s girlfriend said ‘Oh, dreams do come true. Take your guitar out and play with one string’. So I took my guitar out, and I began to practice, and I became the perfect one-string guy. Practice makes perfect.”

Melding the reggae archetypes with bluesy grit, and the aforementioned winks in the direction of soul and American roots music, the persona of Brushy One-String emerged from Chin’s eclectic explorations, espousing a journeyman blues painted large in broad musical strokes. A wider palate of sounds and stories had always spoken to Chin growing up. “I love reggae, I love blues music, R’n’B, love songs. I love the stories they told. If the beat is up to my tastes, I’ll be interested. I’m an all-purpose person when it comes to music.”

This approach was informed by the breadth and depth of music with which Chin was surrounded growing up: his family’s prominence in music locally aside, instruments, records and other points of reference were all around him as he grew up. “I started when was a teenager, I loved the drums. My grandma, she had a church, and I had to play the drums, like every Sunday. After that, I played drums professionally, standard drums, conga drums, tambourine. Now I play all my percussion with my one-string guitar (laughs).”

The big break Brushy received came from a chance encounter with documentary film-maker Luciano Blotta. Blotta had come to Jamaica to film Rise Up, a piece following the fortunes of three young artists over the course of five years, in rural recording studios across the island. As the documentary process was winding down, Blotta happened across Brushy outside a studio, and was compelled to film a performance of his song Chicken in the Corn. Initially tacked on to the end of the documentary, the clip itself became a YouTube hit, documenting his oddball, percussive play. Said success led Blotta to track Brushy down again and seek to represent him to a wider audience. “That was really magic. I was in Mandeville at the time, I’d just spent five years in England. I was in studio and I’d seen this white guy with a big camera, y’know, was videoing everybody. And I was so broke, I really did want the money. I walked over and I was like, ‘’Ey! White guy! I’ll sing you a song. I took out my guitar and I played him Chicken in the Corn. That was the first time I met him. I forgot all about it, then I heard he’d come back to Jamaica for this documentary he was making. I’d see him in the street, but I didn’t recognise him. He was looking for me, because he wanted me to play something else again. I didn’t recognise him, so I approached him with the same approach as the first time. ‘‘Ey white guy, what’s up, I want to make some money.’ He was like ‘you don’t remember me? I recorded Chicken in the Corn. I’m going to put it up on YouTube, I need you to sign these papers, etc, etc.’ I couldn’t read properly, so I just signed the contract, and thought nothing of it. He called me up three weeks later, and said ‘you’ve got 30,000 views, we should do something about this’. I was like, ‘WHAT?’. We did the first album from there.”

A life-changing experience like this was bound to impact on his career, and so it went that Brushy put down that first album with Blotta’s help, bolstered by a wide reach to a larger audience courtesy of YouTube. The question must surely have hung over Brushy’s head of how this change would affect his career, but found his message was perfectly suited to bring writ large. “It was a difficult change for me, because I was gone for five years. When I got back, I didn’t know what to do for an audience to know that I’m here. I tried (a few things) and went on Jamaican TV, than Luciano called (and the video went viral). Everyone was like ‘this guy is different! A one-string guitar!’ It got wild. The song itself, Chicken in the Corn, isn’t a generation thing, it’s for old and for young, talking about good people and bad people, ups and downs, in a fun way, y’know? It’s reality, you try and do the things you love and people will try and take you down, try to stop you. It’s easy to explain to anyone, and everyone can relate.”

Brushy takes on another EU tour this summer for the festival grind, including a stop at Townlands Carnival, happening next month in Macroom. With a couple of years of worldwide touring under his belt, he’s enjoying the road and looking forward to the event, some pre-gig jitters aside. “I’m nervous every so often, but I always try and that creativity to get the confidence to go out, start and finish.” It’s the last hurdle ahead of the next chapter in his ongoing story, with new material on the way and the challenge of maintaining longevity ahead. “Right now I’m working on a song as we are speaking. I’m working on the next album. I want the next album to have a full sound, and to be able to take that and put it on the road.”