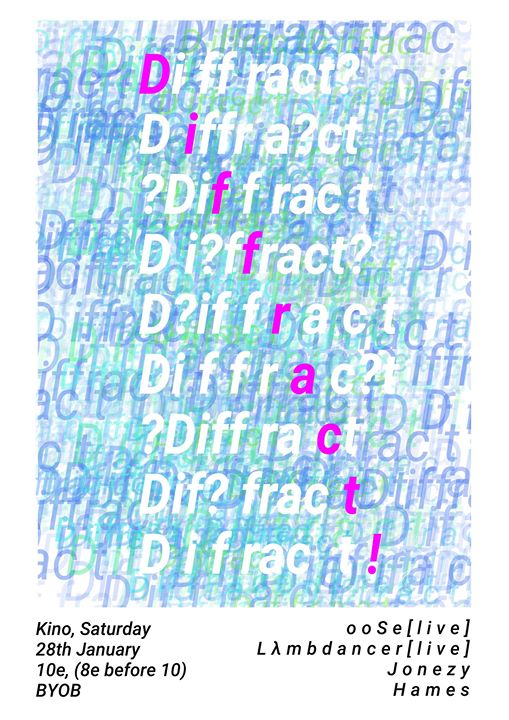 Ahead of their January outing on Saturday, Mike McGrath-Bryan speaks with Eamon Ivri of Cork club night Diffract about its DIY nature, the Kino and the Cork scene.

An eclectic, community-run club night catering to many tastes currently not being seen to by the big boys in town. This is the idea behind Diffract, a DIY club running semi-regularly from the Kino on Washington Street, the ex-arthouse turned BYOB space/cultural melting pot. Kicking off last year, the night was the result of collaboration, says co-promoter Eamon Ivri.

“Diffract came together from myself, Conor Gilligan, Paraic Joyce (aka, DJ Reich Joyce) and David McGuire. Our original aim was to throw left-of-field gigs, in particular, club nights that weren’t playing the kind of music you’d find in the regular venues: much more subversive electronic music catering to a different palette, techno, avant-garde, electro, minimal with a focus on both live and dj sets. The name Diffract came from Paraic, and local producer ELLLL. The aim was originally monthly gigs but as we get into the swing of things we’ve realised at this time, with our resources, every month is not feasible so we scale it back to bigger events comprised of great line ups which are smartly promoted. Diffract is currently made up of myself, David, and new addition Éabha Hennessy.”

The club night’s residency in the Kino is part of the venue’s eclectic array of events, something that the collective is enthusiastic about their role in. Ivri goes into the venue’s strengths and what it brings to the city’s scene. “The Kino as a space is excellent. We enjoy how open it is, a myriad of different events are held there without any discrimination of type: from raves to folk music to wrestling. One bonus about the space is the fantastic projector set up, which really allows our show to come alive with the visuals we create for the event. The Kino is a lifeline for promoters right now working off the grid. It’s central, on a known street, right beside town, and its doors, usually close at 1am, leaving the crowd to easily head into town once it’s over. No fuss. And of course, Mick Hannigan handles the needs of everyone as best and as diligently as he can.”

Diffract’s “community club” designation is an interesting, one for an overarching umbrella of genres and scenes that’s already quite grassroots in Cork. Discuss? “Well, when you count out a few choice venues, there are very few places that cater to the music that we know is being produced in Cork but isn’t often given a platform to be showcased to the public. Our aim is to create a space where the more experimental sides and sounds of electronic music can exist alongside the danceable aspects of the genre. Open mics, plentiful within this musical city, simply can not accommodate a lot of what non-singer-songwriters want to do. The music being played here is fantastic stuff but of course not chart music, our DJs spin genre classics and underground numbers alike and our bands/producers are gonna be less along the standard lines of the vocalist-guitar-bass-drummer set up.”

February 28th will be headlined by ooSe’s live show. What we’ve seen of them has been spectacular, but what are Ivri’s thoughts on the band and their newfound momentum? “We first came across ooSe at SiDúBí festival, held at Blackwater Castle. A multitude of colourful and strange acts were performing. but this enigmatic 3-piece stood out amongst all this, with their strange style of funk infused licks and techno beats. While their music is different and brilliant in its own respect, they are also all fiercely talented musicians dedicated to cultivating their own sound, and this momentum will be a great inspiration for musicians in Cork creating music that is a little different. We are very much looking forward to their set, and the enthusiasm from the guys is unbelievable.”

Also on the undercard are Lambdancer, the electro-punk project of producer Jimmy Darqhorse and pseudonymous ex-folk singer Moonbird, as Don O’Mahony wrote about in his column last week. They’ll be performing a live set. What should people that haven’t seen them expect? “Lively, ravey, electro, fun, danceable and hard-edged sounds grinding out of their little black boxes akin to the Prodigy. If you’ve seen their videos from the likes of Electric Picnic you will know they keep themselves on their toes and bring the crowd up right up their with them. Jimmy and Sian, who comprise Lambdancer, also have side projects under Darqhorse and Moonbird respectively and their energy combined, can be described as nothing less than monumental.”

Sound-artist Hames is opening the show. He’s been a much-overlooked part of the Cork scene, specifically in the city’s avant-garde. His booking at the start of the show speaks to eclectic line-ups at Diffract, balancing strange sonics and big beats, says Ivri. “Hames is just fantastic. Since his first gig with us, we have been hooked on the man’s eclectic style and we were eager to get him back with us. Anyone who’s heard him live will know where we’re coming from, when we say his mixes provide a fresh, dark and exciting take on his catalogue, creating a brooding atmosphere which you can dance to. In short, weird but brilliant. Which in essence is what we are trying to promote with Diffract: music that you won’t find in commercial clubs in Cork. The balance in weirdness and beats is hard to measure, but it’s quite simple when you hear something you like.”

The Cork scene is awash with great talent at present, but there’s something to be said for Ivri’s earlier statement on the limitations currently affecting promoters owing to a lack of spaces, among other factors. Ivri weighs these two occurrences against each other. “With great respect to the venues and promoters that do a great job of working with limited resources, it’s sometimes a little frustrating finding venues that can accommodate an organised gig. The Cork scene for artists in general is becoming stifled by the economic recovery, which only seems to be driving artists out of spaces they once called home, for example the Camden Palace, who luckily found a new place, and Sample Studios. These artists kept the city an attractive place for people to come to during the hard times. The government has commoditised culture in Ireland, selling it and making plenty of money from tourism. However, if that culture doesn’t fit within a particular brand of “Irishness” it’s left out to fend for itself, which is a sad state of affairs when it is exactly this vibrant arts scene that makes Cork what it is. Nine out of ten people here will tell you about the nightlife and that’s something we should capitalise on, but instead of making a routine of it, how many clubs/pubs have changed name over the past few years, as keys have passed hands, trying to make something out of a spot that’s no different than the bar next to it. or what it was formerly? The lack of support can be damaging and the lack of new ideas being thrown out there or supported is stifling.”

It is in this defiance that Diffract is rooted, and now looks set to grow from. The crew is happy with upcoming dates. “The future looks great, full of opportunity and great music to start getting out there. Our current goal is just to find a rhythm which works best for us, and can allow ourselves to throw gigs of consistent quality, that can be properly promoted and sustainable. Our next gig, which has no set date yet, is already in motion and looks set to feature BiPolar Beats, who is putting out a record soon on Asphalt Pirates, and Cube’s main man and Eclecto honcho Gary Fitz. All in all we are eager to work with more enthusiastic heads, DJs and musicians alike, that seem to be bursting out of the woodwork, the more we delve into the fantastic music scene not just here but throughout the whole of the country.”